‘George Elford Hudson, a Fellow of the American Ornithologists’ Union, died on 4 August 1974 at his home on Rose Creek, near Pullman, Washington. He was an eminent avian anatomist, a general zoologist of the old school, a demanding mentor, a farsighted conservationist, and a unique personage.

George was born on 6 May 1907 in Spartanburg, South Carolina, the second of the seven children of Joseph Taylor Hudson and Belle Haynsworth Hudson. Following primary and secondary schooling in Spartanburg, George earned the Bachelor of Science degree in entomology and zoology at Clemson College (1928) and the Master of Science (1930) and Doctor of Philosophy (1936) degrees in zoology at the University of Nebraska. The subject of his graduate research, avian comparative myology, remained one of his central interests throughout his life. During his years in Nebraska, he served for brief periods from 1931 to 1938 on the faculties of Grand Island College, Nebraska Wesleyan University, and the University of Nebraska. While at the University of Nebraska, he met and married in 1929 Bessie B. Friedrich, a notable personage who assisted George in many ways in his research and conservation activities. Their daughter, Belva Hudson Clement, earned the Ph.D. degree in geology, and their son, George, is a commercial airline pilot.

On 1 September 1938, George accepted a post as Assistant Professor of Zoology and Curator of the Charles R. Conner Museum at the State College of Washington, where he remained for the rest of his life. From 1942 to 1946 he served as an officer in the U.S. Army Chemical Corps, posted in the Pacific Theater, and subsequently attained the rank of Lt. Colonel in the Reserve Officer Corps. Upon returning to his academic post in 1946 he was promoted to Associate Professor, then to Professor of Zoology in 1951. When he retired in 1972 he was named Professor Emeritus (then a special and distinguished rank at Washington State University) and remained active in research and conservation activities until his 6-year seige with heart disease finally incapacitated him in 1974.

George’s professional interests centered in ornithology, mainly regional faunistics and avian anatomy, but he possessed an expert’s knowledge of all aspects of vertebrate biology and museum science. His bibliography of 75 titles, beginning with a note in The Auk in 1927, includes not only many short contributions on the distribution of birds and mammals in Nebraska, Alaska, and the Pacific Northwest, but also notes on taxidermic techniques, a major monograph on the amphibians and reptiles of Nebraska (1942, Nebraska Conserv. Bull. No. 24), a definitive “Distributional list of the birds of southeastern Washington” (with C. F. Yocom, 1954, Res. Stud. State Coll. Washington 22: 1-54), and, of course, his series of monographs on avian appendicular myology, published in The Ibis and American Midland Naturalist between 1937 and 1972. Several of these were co-authored with his assistants and students and represent on the national and international scale his most enduring and significant contribution to ornithology. He was an authentic North American pioneer in avian comparative myology, and his work in that field was preceded only by Shufeldt’s book on the raven (1890) and Burt’s paper (1930) on woodpeckers. Alden Miller’s studies of the myology of Nesochen were published in 1937, concurrently with Hudson’s first monograph. Aside from the painstaking detail and accuracy of his morphological analyses, one of George’s main contributions was the standardization of myological terminology. In this, he modified and improved the earlier nomenclatures of Fürbringer and Gadow and Selenka, and drew the attention of North American avian anatomists to these nearly forgotten Europeans. George left to others the functional and developmental aspects of avian myology and concentrated his attention on taxonomic applications. His taxonomic conclusion, and especially those based on his later excursions into numerical taxonomy, proved to be controversial; but this (or any other form of controversy) never deterred George, or even troubled him very much. His morphological analyses were thorough, reliable, and accurate (he personally checked nearly every dissection made by his students and assistants) and represented the standard of quality for subsequent work in this field.

George Hudson’s other scientific contributions were mainly of local or regional scope, consisting of his development of a thorough knowledge of the avifauna of eastern Washington and his work as Curator of the Conner Museum. His increasing involvement in conservation was foreshadowed in 1949 by the onset of a 5-year inventory of the vertebrates of the Columbia Basin before the region was modified by the irrigation schemes of the Corps of Engineers and the Bureau of Reclamation. His data, still unpublished, provide the baseline for a “before-and-after” study of the impact of this project and illustrate George’s premonitions and vision as a conservationist.

As a museum manager, George was a superlative technician. Building from a handful of shabby specimens that he inherited in 1938, he assembled bird and mammal collections that are quantitatively rivaled in the Pacific Northwest only by those of the Burke Museum at the University of Washington. An excellent taxidermist, George prepared nearly all of the more than 500 mounted specimens, ranging from hummingbirds to elk, in the public displays of the Conner Museum. I know of no one more skilled than he in the rapid preparation of study skins. He had an artist’s eye and hand for even the most routine work, and his specimens are uniformly beautiful. No lesser word describes them accurately. George also assembled an excellent array of alcoholic specimens, mainly by firsthand collection throughout North and Middle America. In 1972 he donated his personal collection of about 500 study skins and sets of eggs to the Conner Museum.

The final decade or so of George’s life was devoted increasingly to conservation projects. Through the 1950’s the varied habitats and animals of the Palouse prairie were being destroyed as the hedgerows, hawthorn thickets, cattail marshes, and woodlands were replaced by a monoculture of wheat and dry peas. Concurrently, the U.S. Army Corps of Engineers reached the Upper Columbia, Snake, and Clearwater Rivers, and even their minor tributaries. The destruction attending these events so insulted George that he set out to do something about it, soon becoming one of the most prominent conservation leaders in Washington. In 1957 the Hudsons purchased several acres of hawthorn thicket on Rose Creek, 11 miles northwest of Pullman, and established a new home and nature preserve there. He and Bess made the natural history of this Rose Creek Preserve (part of which they later deeded to The Nature Conservancy) accessible to schoolchildren throughout the region. In 1968 George almost single-handedly badgered Washington State University into purchasing 800 acres of prairie and pine-woods remnants on a prominent butte, Smoot Hill, adjacent to his home.

During this decade, George also organized the Inland Empire Chapter of The Nature Conservancy and served as its Chairman and main driving force for several years. He served as a founder and board member of the Washington Environmental Council and became a formidable spokesman for environmental protection as the Corps of Engineers gradually destroyed the Snake River as far east as the border of Idaho, and then extended its attention beyond. Spending his failing health, George traveled widely to express his opinions at the hearings of federal agencies and assisted in establishing the citizen’s right to attenuate the cynical exercise of remote bureaucratic power.

In 1969 George became the first Director of the university’s land at Smoot Hill, with the charge that he formulate and implement a development plan in concert with various groups in the university. It was George’s vision that the land should be returned as nearly as possible (he was a realist about what was possible, but wanted at least a replica) to its preagricultural condition, and thereby function as a nature reserve and locus for ecological research. This vision did not coincide with that of others in the university who felt that the development should be multipurpose, including, for instance, an arboretum, experimental gardens, a pig farm, and even a convention center. The startling pyrotechnics that illuminated this controversy, and George’s resistance of what he called the “Balkanization” of the area, do not need to be detailed here. George prevailed, as usual by being stubborn. He thus set the tone for events still in progress, enlisting (dragooning is a better word) students, Boy Scouts, townspeople, professors, and even academic deans and vice-presidents as part of his ad hoc work force in eradicating weeds, collecting and germinating seeds of native plants, repairing fences, and building ponds and mud fiats for waterbirds. One of his last major projects was the restoration of a hawthorn thicket in a bottomland previously cleared as a wheatfield, adjoining the hawthorn woods of his own property. Even when he was too ill to engage in much physical labor himself, George was there, supervising the planting and watering of thousands of hawthorn shoots. It is fitting that the Board of Regents of Washington State University in May 1975 named this area “The George E. Hudson Biological Reserve at Smoot Hill.”

George’s character and personality resisted conventional labels, and in turn on various issues he could be conservative, liberal, and radical. Perhaps because of his early development as an outdoorsman and naturalist, he had the frontiersman’s view of a world in which self-reliance, independence of thought, and hard work were cardinal virtues. A stout and salty advocate of his own opinions, he was nevertheless a generous winner and (even if he continued to grumble ominously) a gracious loser in the give-and-take of academe. Because of the impeccable performance standards that he maintained for himself as well as others, he was uniformly respected even by his chronic adversaries. Those of us who knew him well remember him affectionately in spite of (or perhaps because of) our disputes with him. Although it seldom surfaced overtly, one always sensed in George a humorous and resigned perspective about his own foibles as well as those of others. Staff meetings were often enlivened and tensions relieved by a wry and pithy remark from George, delivered in his South Carolina vernacular and drawl. (I was always amazed by how long “Phalacrocorax” became when George said it.) It was this quality that enabled George’s graduate students, of whom I was one in 1950-52, to survive his didactic methods, which featured instruction by example rather than deliberate tutoring. George showed you how he did things, and was impatient and critical if you did not catch on immediately or produced even a whiff of slipshod work. In his unique and perhaps unintentional way, George was according us a considerable compliment by expecting that we become immediately as skilled as he was, but it usually took months before we realized this. During this incubation period, the typical Hudson student tended to mutter erratically and to flinch at sudden noises. My only vitrolic exchange with him during our 20-year relationship occurred one day when, as a first-year graduate student, I was teetering on climbing irons about 30 feet above the ground on a creaking cottonwood snag, attempting to inspect a woodpecker nest in a particularly awkward place. George stood beneath, exhorting me with advice about how he did better than that as a boy in South Carolina without climbing irons, and anyhow if the snag did break I would only fall into the nearby river. Was I chicken? At this stage I yelled at George some intemperate suggestions about what he could do with the climbing irons, the river, and South Carolina, and descended to the ground. After this we always got along rather well.

George was always a man to “put my money where my mouth is,” as he often said, contributing generously to many conservation projects. At the time of his retirement he endowed a summer research assistantship for the continuing support of work by graduate students at Smoot Hill, and he bequeathed to The Nature Conservancy a quarter-section of woodland in Idaho. These acts epitomized George Hudson perhaps better than anything else in his career. Never a bystander, his life and work had an enduring effect on people, ideas, and things.’ 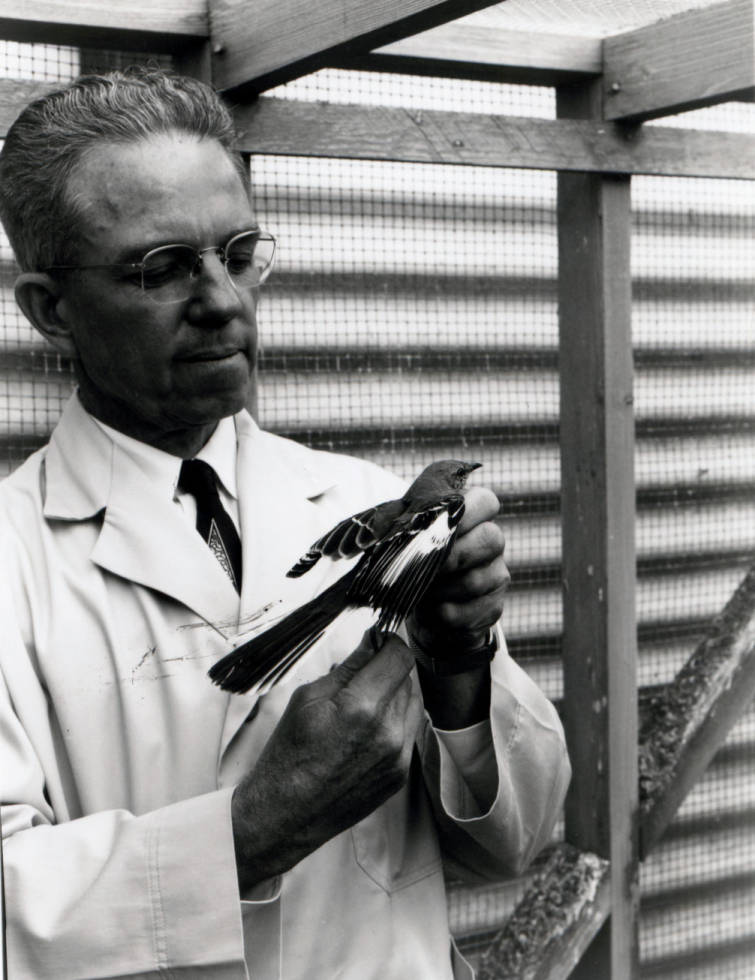 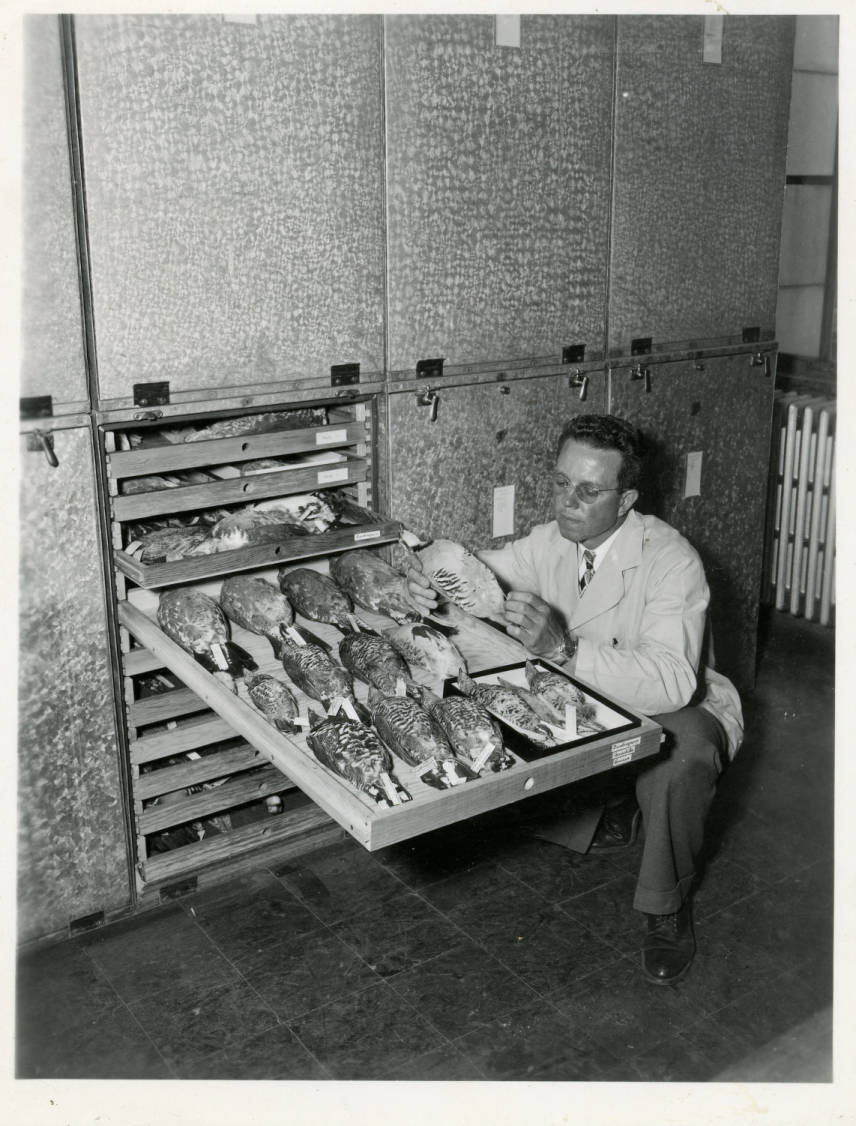 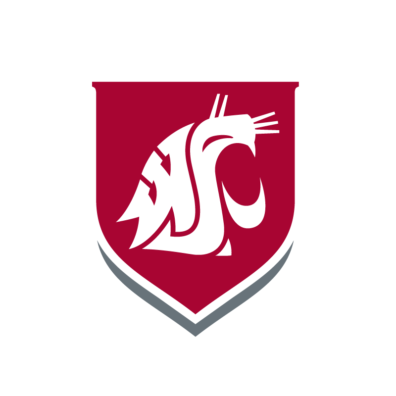