I came to Prof. John Peters’ lab at Montana State University in 2005 to study hydrogenases from phototrophic bacteria. My research focuses on the structural and biochemical characterization of variety of enzymes involved in nitrogen (nitrogenases), hydrogen (hydrogenases) and carbon (bifurcation enzymes, enzymes of methanogenesis and propylene metabolism) enzymes of metabolisms. In the lab we are using anaerobic techniques for expression, purification and crystallization oxygen sensitive enzymes, containing different metal co-factors. I have been studding hydrogenases from phototrophic bacteria and their role in the detoxification of metal ions in bacterial cells. The area of my research expended to characterization of hydrogenases encapsulated in silica gel materials and development of photo hydrogen producing catalysts, photosensitizers and sensor systems based on hydrogenases and nitrogenase. Recently I have been working on structural characterization of LmrR as a scaffold protein for different applications.

The biological reduction of dinitrogen to ammonia is catalyzed by the complex metalloenzyme nitrogenase. Structures of the nitrogenase component proteins, Fe protein and MoFe protein, and the stabilized complexes these component proteins, have been determined, providing a foundation for a number of fundamental aspects of the complicated catalytic mechanism. The reduction of dinitrogen to ammonia is a complex process that involves the binding of N2 followed by reduction with multiple electrons and protons. Electron transfer into nitrogenase is typically constrained to the unique electron donor, the Fe protein. 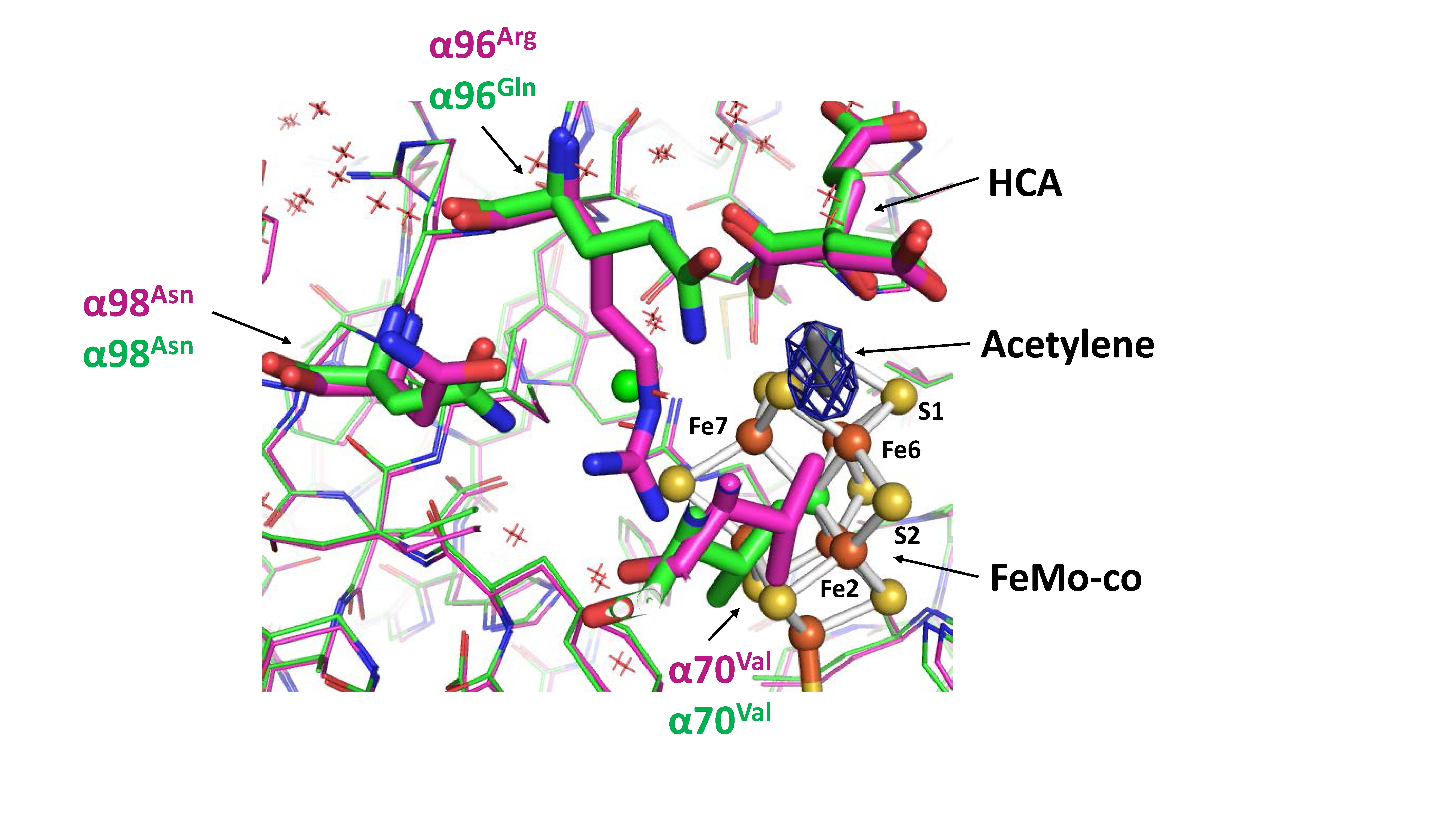 Differences at the acetylene binding site in the α-96Arg-→Gln variant and native MoFe proteins. The differences in the positions of the α-70Val, α-98Asn, α-96Arg, and α-96Gln involved in the acetylene binding at the active site of the α-96Arg→Gln variant (in green) and native (3U7Q [21], in magenta) MoFe proteins are shown. Acetylene is modeled into the Fo-Fc electron density map (contoured to 4.0 σ, blue mesh) near the FeMo-co. The amino acids of MoFe protein and homocitrate (HCA) are shown in sticks, FeMo-co is shown in balls and sticks. The water molecule involved in the interaction between α-98Asn and α-96Gln is shown as a green ball, other water molecules are shown in red exes.

Our previous work has revealed that the P-cluster undergoes redox dependent structural changes and that the transition from the all-ferrous resting (PN) state to the two electron oxidized P2+ state is accompanied by protein serince hydroxyl and backbone amide ligation to Fe. In this work, the MoFe protein was poised at defined potentials with redox mediators in an electrochemical cell, and the three distinct structural states of the P-cluster (P2+, P1+, and PN) were characterized by X-ray crystallography and confirmed by computational analysis. These analyses revealed that the three oxidation states differ in coordination implicating that the P1+ state retains the serine hydroxyl coordination but lacks the backbone amide coordination observed in the P2+ states. These results provide a complete picture of the redox-dependent ligand rearrangements of the three P-cluster redox states. 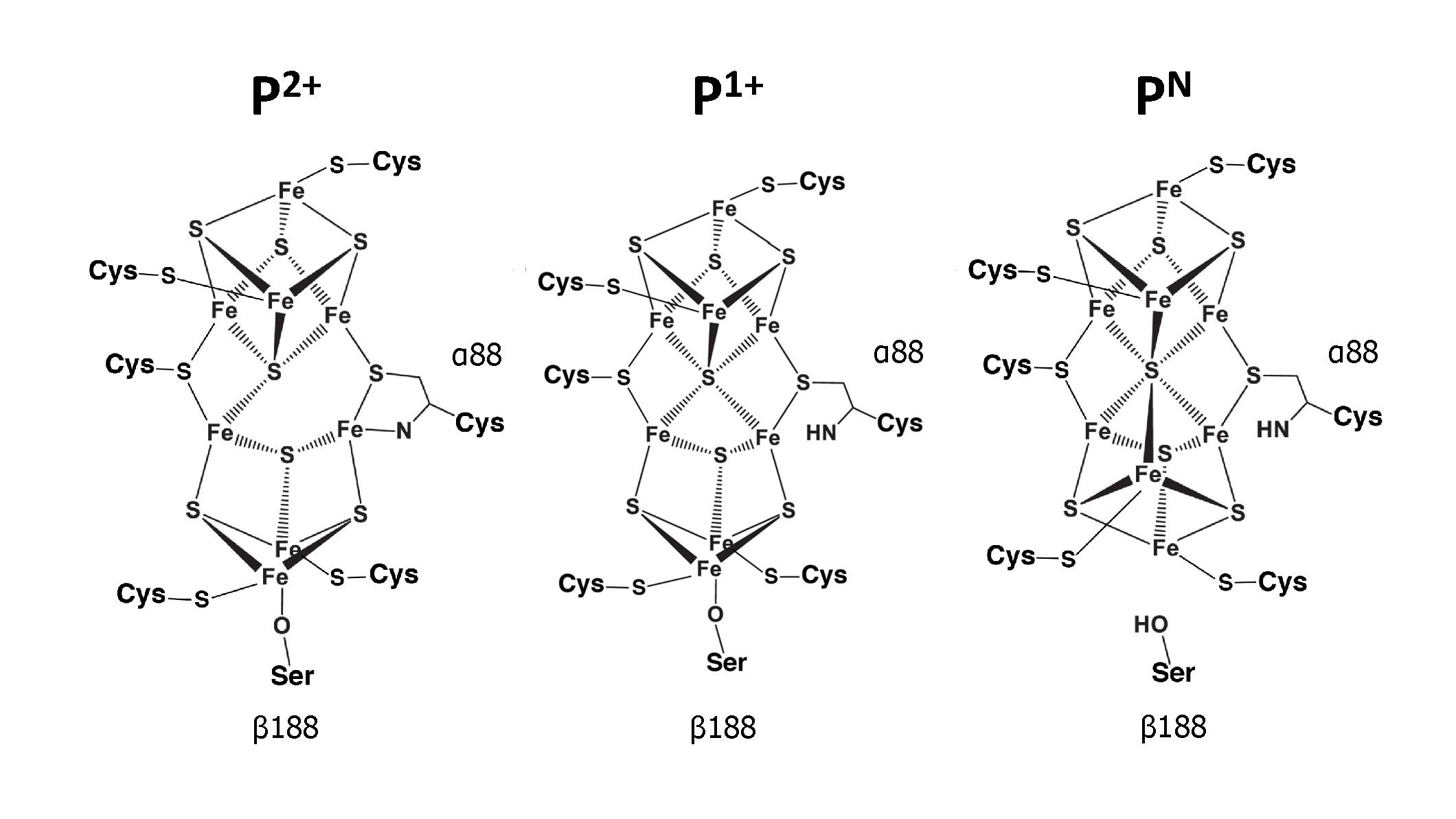 Structural representations of the P2+, P1+ and PN  redox states of the P cluster, highlighting differences in ligation.

The utilization of CO2 to generate chemical fuels, such as formic acid, is a potentially beneficial route to balance carbon emissions and reduce dependence on fossil fuels. The development of efficient catalysts for CO2 hydrogenation is needed to implement this fuel generation. In the molecular catalyst design presented here, we covalently attached a rhodium complex, ([RhI(PNglyP)2]−, where PNglyP is defined as PEt2–CH2–N(CH2CO2–)–CH2–PEt2) to a protein scaffold, (lactococcal multidrug resistant regulator from Lactococcus lactis) to use the protein environment around the metal center to control substrate delivery and therefore enable and improve catalytic activity. The reactivities of the rhodium complex and the synthetic metalloenzyme were characterized by high-pressure operando NMR techniques. In solution, the rhodium complex alone is not a catalyst for CO2 hydrogenation. Incorporation of the rhodium complex into the protein scaffold resulted in a gain of function, turning on CO2 hydrogenation activity. The metalloenzyme displayed a turnover frequency of 0.38 ± 0.03 h–1 at 58 atm and 298 K and achieved an average turnover number of 14 ± 3. Proposed catalytic intermediates generated and characterized suggest that the protein scaffold enables catalysis by facilitating the interaction between CO2 and the hydride donor intermediate. 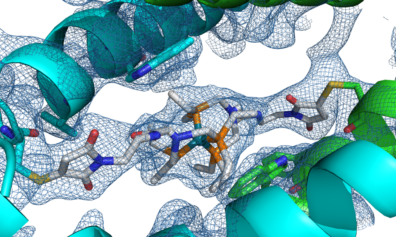 Recently a new type of enzyme system was described to regulate the redox pools of Fd, NAD(H) and NADP(H) in anaerobes, which lack the canonical transhydrogenases. The redox pools in some anaerobes are balanced by a bifurcating enzyme called NADH-dependent ferredoxin NADP oxidoreductase (Nfn). This was first reported in Clostridium kluyveri and catalyzes the production of NADPH coupled to the simultaneous oxidation of NADH and reduced Fd. This enzyme carried out flavin-based electron bifurcation, a fundamental mechanism of biological energy conservation. In anaerobes, Nfn is directly involved in shuttling electrons between the three main redox carriers in anaerobes, Fd, NADH and NADPH. In our laboratory we are working on NfnI and NfnII from Pyrococcus furiosus in collaboration with Prof. Mike Adams group from University of Georgia. 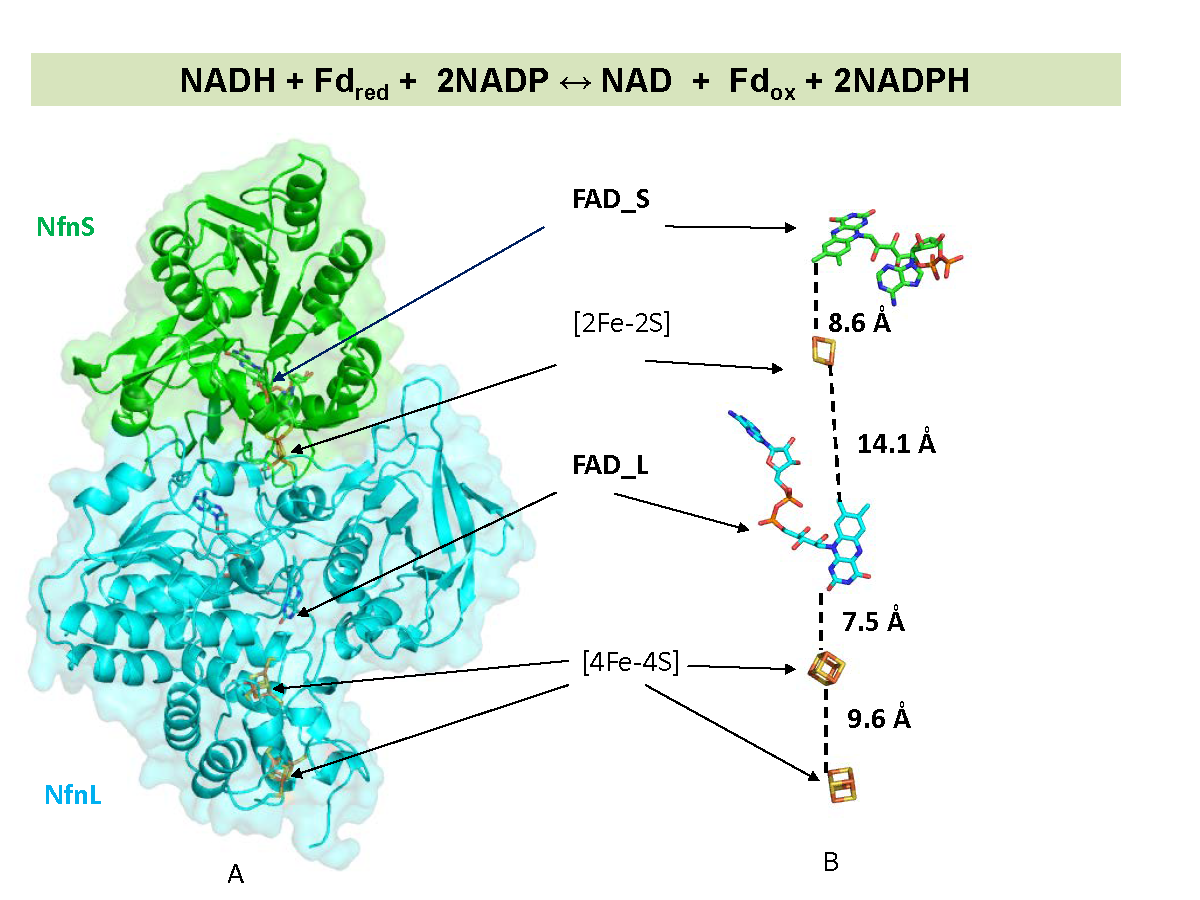 Transmission electron microscopy data of the hydrogenase from T. roseopersicina indicated that it is organized in complicated super molecular complexes consisting of 6 αβ-dimer units. Together with Professor L. Tang from the University of Kansas, performing cryoreconstruction experiments, we found that the super molecular complex consists of 2 agglomerated rings composed of three heterodimers (6 heterodimers total) (Figure 1).

Metal detoxification and nano particles formation by microorganisms and their hydrogenases

A common microbial strategy for detoxifying metals involves redox transformation which often results in metal precipitation and/or immobilization. The focus of our research is the influence of ionic nickel [Ni(II)] on growth of the purple sulfur bacterium,Thiocapsa roseopersicina.  The results show that Ni(II) in the bulk medium at micromolar concentrations results in growth inhibition; specifically, an increase in the lag phase of growth, a decrease in the specific growth rate, and a decrease in total protein concentration when compared to growth controls containing no added Ni(II).  The inhibitory effects of Ni(II) on the growth of T. roseopersicina could be partially overcome by the addition of hydrogen (H2) gas.  However, the inhibitory effects of Ni(II) on the growth of T. roseopersicina were not alleviated by H2 in a strain containing deletions in all hydrogenase-encoding genes.  Transmission electron micrographs of wild-type T. roseopersicinagrown in the presence of Ni(II) and H2 revealed a significantly greater number of dense nanoparticulates associated with the cells when compared to wild-type cells grown in the absence of H2and hydrogenase-mutant strains grown in the presence of H2.  X-ray diffraction and vibrating sample magnetometry of the dense nanoparticles indicated the presence of zero-valent Ni, suggesting Ni(II) reduction (Figure 2).

Purified T. roseopersicina hyn-encoded hydrogenase catalyzed the formation of zero valent Ni particles in vitro, suggesting a role for this hydrogenase in Ni(II) reduction in vivo (Figure 3).  Collectively, these results suggest a link between H2metabolism, Ni(II) tolerance, and Ni(II) reduction in T. roseopersicina. We have been Currently, collaborating with the Pushchino group (Russia) we have been working on purification as well as spectroscopic, and structural characterization of a hox encoded [NiFe]-hydrogenase from Chloroflexus aurantiacus.

Encapsulation of hydrogenases in sol-gel material doped with carbon nanotubes

Much attention has been directed towards developing hydrogen fuel technology in order to realize the tremendous potential hydrogen gas has as a clean, renewable, and reliable fuel source.  The enzyme hydrogenase can catalyze the production of hydrogen from protons and electrons. We have demonstrated that silica-derived gels can be used to stabilize hydrogenases.  We have been investigating the conditions for encapsulation to promote significantly enhanced levels of activities by doping gels with multi-walled carbon nanotubes, polyethylene glycol and methyl viologen (Scheme 1).  Optimization of these dopants results in hydrogen production levels comparable to those observed for the enzyme in solution.  Encapsulation of active hydrogenases in solid materials is a promising advancement towards their use in hydrogen producing catalytic materials applications.

The exposed surfaces of the protein-based H2 producing catalyst systems (both the hydrogenase and synthetic protein cage systems) provide a rich template for covalent attachment of light harvesting antennae systems including either molecular, colloidal, or solid surfaces. The overall goal of this research is to maximize the light harvesting capacity of each self-assembled protein-based catalyst for optimized and directed electron transfer to the protein catalyst.  For the hydrogenases, covalent attachment is not simple since the ability to heterologously express the enzymes of interest in a manner that allows the purification of large amounts of homogenous preparations of enzyme is not straightforward.  We have therefore been using a two pronged approach involving pilot work targeted at providing a preliminary analysis of the effects of coupling model light harvesting complexes to both [NiFe]- and [FeFe]-hydrogenases that are the targets of our studies and in parallel improving the means to express hydrogenase enzymes and engineer modification sites in an informed manner.
Our intitial studies on covalent attachment has been using the [NiFe]-hydrogenase from Thiocapsa roseopersicina as a model system because it is highly stable in comparison with other [NiFe]-hydrogenases.  In our pilot work, the enhanced stability of this enzyme allows it to retain a signficantly larger percentage of activity that other [NiFe]-hydrogenase or [FeFe]-hydrogenases upon labeling.  The photocatalytic ruthenium complex ([Ru(bpy)2(5-NH2phen)]2+) (Ru(II)-complex) has been covalently attached to stable [NiFe]- hydrogenase from T. roseopersicina using 1-ethyl-3-(3-dimethylaminopropyl carbodiimide (EDC) which links amino groups of the complex to exposed carboxyl groups of the hydrogenase.  We have optimized the conditions for the light depended hydrogen production by the covalently modified protein with the Ru(II) complex (Figure 4). We have been able to show that labeled T. roseopersicina hydrogenase retains ~50% of its activity after labeling and highest activities are observed at pH 5.0 under a nitrogen atmosphere and irradiated by 150,000 Lux light.  So far we were unable to demonstrate light dependent reaction by labeled hydrogenase without an electron carrier; however we have found that attachment of the Ru(II) complex to the hydrogenase greatly enhances light dependent hydrogenase activity (22 times) over that of the equivalent Ru(II) complex concentrations in solution.

1998-2005
Research Fellow
Laboratory of Biochemistry and Biotechnology of Phototrophic Microorganisms of the Institute of Basic Biological Problems of the Russian Academy of Sciences, Pushchino, Moscow Region, Russian Federation.