Around the world, coasts are eroding as sea levels rise. It would be useful to predict such erosion, but at present some of the most fundamental processes of coastal sediment transport remain unexplained.  It is well known that, during storms, large waves and strong coastal currents scour sand  from beaches.  Between storms, when waves are smaller, sand is  replensihed and beaches are rebuilt.  Yet the mechanism for this  replenishment of sand is not understood.

Some time ago, I developed a model to investigate potential mechanisms for shoreward sediment transport (below).  Alex Hay of Dalhousie university has since developed the “MFDop”, which is the first instrument capable of testing this model.  Greg Wilson helped Alex develop and apply the MFDop, and Saurabh Apte developed highly detailed LES modeling for sediment suspensions. Together, over the next few years we will work on an NSF funded project to conduct detailed model-data comparisons, to determine the primary mechanisms for shoreward transport. Our project, and the wider topic of coastal change in Oregon, is explained in this powerpoint (100MB file), made for a 202 public seminar at a community center in Arch Cape, the likely site of our field experiment. 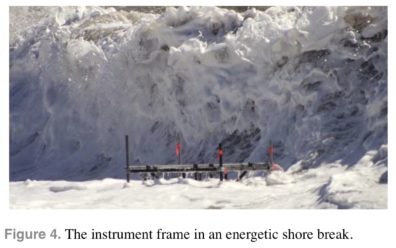 During 2002 and 2003, I worked at Oregon State University’s College of Oceanic and Atmospheric Science with Prof. John S. Allen. We found that an eddy-diffusive model of water and sediment motion near the seabed predicts the shoreward and seaward migration of a shore-parallel sandbar observed during the Duck94 field experiment. According to the model, sand was carried seaward by the seaward mean flow. More interestingly, sand was driven shoreward by the combined effects of several nonlinear wave processes: wave skewness, wave asymmetry, wave-generated vertical momentum fluxes (Eulerian streaming), and the Stokes drift. Surprisingly, horizontal pressure forces on sediment particles were not required to predict shoreward bar migration. Here’s a paper on this work: