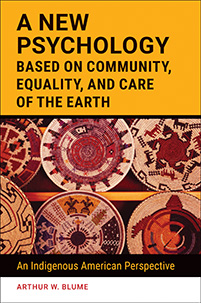 Dr. Blume is author of the books, A new psychology based on community, equality, and care of the earth: An Indigenous American perspective and Treating Drug Problems, editor of the book series, Social issues in living color: Challenges and solutions from the perspective of ethnic minority psychology, and has published over 100 scholastic articles and book chapters. He has been honored with the Joseph E. Trimble and Jewell E. Horvat Award for Distinguished Contributions to Native and Indigenous Psychology, a Rockefeller Foundation Academic Writing Fellowship, an appointment as President’s Professor at the University of Alaska Fairbanks Center for Alaska Native Health Research, and as APA fellow in Divisions 45 and 50 (Society of Addiction Psychology). He served as 2020 President of Division 45 of the American Psychological Association (APA), the Society for the Psychological Study of Culture, Ethnicity, and Race, and also served as a past president of the Society of Indian Psychologists, as Associate Editors of the journals Cultural Diversity and Ethnic Minority Psychology and Addictive Behaviors, and as a member of the American Psychological Association’s Working Group on Health Disparities among Boys and Men. In 2003, he was awarded the Early Career Award for research in addictive behaviors.

My current research is conducted in the context of multicultural psychology, examining how microaggressions, prejudice, and discrimination impact substance use and mental health. Current studies are examining those relationships among college students of color, as well as collaborative research working American Indian and Alaska Native communities with other likeminded researchers. I also have experience in applied and clinically relevant etiological and intervention research with other populations at high risk for substance abuse such as college student drinkers, people with co-occurring mental disorders and cognitive dysfunction, military personnel, and incarcerated populations. If you would like to know more about my work, I invite you to review my CV.