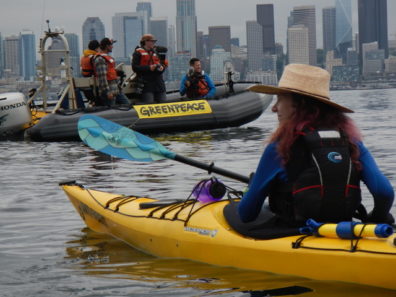 I grew up in a suburb of Washington, D.C. Before and during grad school, I worked as a bartender, taxi driver, janitor, office temp, caregiver, and cook, including a season in the canneries in Naknek, Alaska. I also worked as an advocate and live-in staff in shelters in Seattle, and I consider these experiences as having very much shaped my work as a teacher and researcher.  My interest in houselessness is rooted in a brief and privileged experience of it as a houseless undergraduate haunting the halls of vacant dorms with my younger sister and pretending not to be houseless.

Since co-creating the digital database The Thin Green Line is People History Project  (with Roben White, with assistance from Derya Ruggles), beginning in 2017, I’ve gotten more interested in exploring digital platforms. For more information on my work, see my personal webpage. For more information on the daily cost of war to your own community, see the National Priorities Project Cost of War

“Thirty Days on a Silent Buddhist Retreat or How I Learned to Breathe thru the Apocalypse,” a serialized play, written and performed by Desiree Hellegers; co-directed, co-produced, and co-edited by actor/producer and WSU Vancouver alum Derya Ruggles. Airing on Open-Signal cable television, which broadcasts on 4 Comcast stations in the Portland, Vancouver metropolitan area to more than 400,000 households. Episode 1 released in September 2021.

“No Room of Her Own: Women’s Stories of Homelessness, Life, Death and Resistance,” staged reading, Fertile Ground Festival, Portland, Oregon, Jan. 23 and 24, 2015.

“Portland, Oregon at the Crossroads: An Anti-fascist Christmas Carol and Tale of Two Cities,” Counterpunch, December 19, 2022.

“Of Scrooges, and Sweeps: Body Snatching and Death on the Street: A Christmas Carol in Portlandia,” Counterpunch, January 1, 2020.

“‘Energy without Injury: From Redwood Summer to Break Free via Occupy Wall Street,” Counterpunch, May 23, 2016.

No Room of Her Own: Women’s Stories Natural Philosophy, Poetry and of Homelessness,
Life, Death and Resistance (New York: Palgrave Macmillan, 2011).

Handmaid to Divinity: Natural Philosophy Poetry and Gender in Seventeenth
Century England (Norman: U of Oklahoma, 2000).