Dr. Bin Yang is a Professor in the Department of Biological Systems Engineering at WSU Pullman and the Bioproducts, Sciences & Engineering Laboratory at WSU Tri-Cities.

He has dedicated most of his career to the development of renewable energy technologies with particular emphasis on production of biofuels and chemicals from cellulosic biomass feedstocks and other sustainable resources.

His current research interests lie in areas of pretreatment, enzymatic hydrolysis, and novel pathways that accelerate commercial application of biomass processing to cellulosic and lignin fuels and chemicals.

In addition to his major research developments, Yang is devoted to training next-generation scientists, graduate and undergraduate students to foster future leaders in industry, academia and government in developing sustainable clean technology to produce bioenergy and bioproducts for demands vital to our future.

He has authored more than eighty peer-reviewed papers and book chapters, made many invited presentations worldwide, and been the first inventor for five patents. 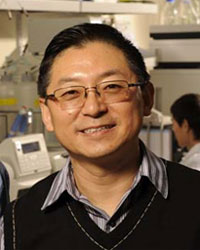