…while we are here, lets celebrate some group news!

Dr. Maren Mossman who has started her new appointment as Clare Boothe Luce Assistant Professor of Physics at the University of San Diego! We wish you much success, many research dollars and many talented students!

Welcome Dr. Ethan Crowell to the lab! Dr. Crowell will be joining the lab as a postdoctoral research associate. He joins us from Prof. Mark Kuzyk’s nonlinear optics lab here at WSU.

Thomas Bersano successfully defended his PhD! His dissertation, entitled “Nonlinear phenomena and stripe-phases in Bose-Einstein condensates” details his work with three-component solitons and superfluid stripe-phases in BECs. Thomas is heading to Boulder, CO to find work in industry. Congrats, Dr. Bersano and best of luck to you in your future endeavors!

Graduate Dr. Maren Mossman was honored at the WSU College of Arts and Science recognition event, receiving the Doctoral Student Award in the Sciences for her contributions to the CAS during her time at WSU. Congrats on your amazing graduate career, Maren!

Maren Mossman successfully defended her PhD! Her dissertation, entitled “Nonlinear dynamics and shock structures in elongated Bose-Einstein condensates,” details the new dual species apparatus in the Fundamental Quantum Physics Lab, and three experiments where time-dependent optical potentials are used to generate nonlinear dynamics. Maren will be staying on as a postdoctoral researcher to finish up her work on the NASA CAL project. Congrats, Dr. Mossman!

PI Prof. Peter Engels and graduate student Maren Mossman traveled to Washington DC for the NASA Fundamental Physics and Quantum Information workshop. At the workshop, Maren presented a poster on “Optimized Parameter Regimes for the Investigation of Efimov Studies on CAL.” They also saw some sights while they were there. 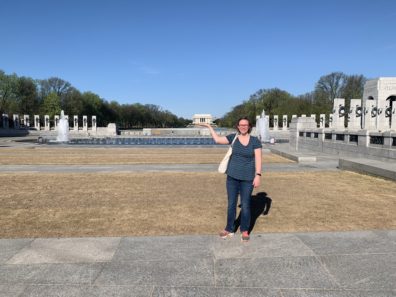 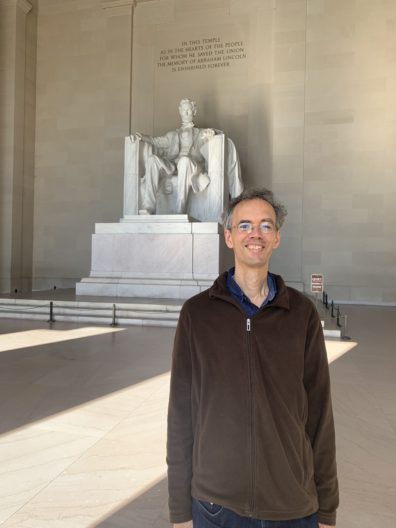 Graduate student Maren Mossman was honored at the WSU Association of Faculty Women Graduate Awards, receiving the Harriett B. Rigas Award. This award is given to outstanding women in graduate studies at the doctoral level at WSU. Congrats, Maren!

Graduate students Thomas Bersano and Maren Mossman both presented their work at the GPSA Research Exposition and Showcase! Maren was awarded 3rd place in the Physical and Social Science category for her poster and presentation of her work. Great work team!

Graduate student Thomas Bersano was one of four representatives from the Physics & Astronomy department at the 3 Minute Thesis (3MT) competition for the College of Arts & Sciences at WSU. He did a great job explaining the quirkiness of superfluids and some of the recent experiments in the FQP lab. Great job Thomas! 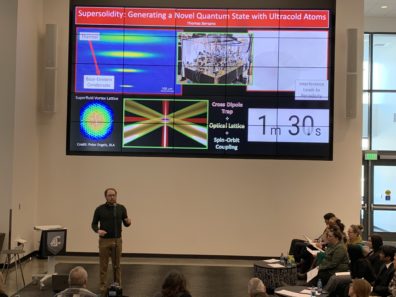 Prof. Peter Engels, postdoc Dr. Sean Mossman, and graduate student Thomas Bersano traveled to Shanghai, China to visit with Prof. Yongping Zhang, a long-time collaborator now at Shanghai University. Members of the FQP lab were each invited to give a talk on current research at WSU. Each of these talks was followed by an in-depth discussion and question session. A great opportunity for FQP members to build relationship with international collaborators!

Postdoctoral researcher Dr. Sean Mossman attended the International Conference for Atomic Physics (ICAP) summer school in Barcelona, Spain (7/16-20). This summer school is a highly competitive, week-long program where graduate and early career researchers have the opportunity to network and attend talks about a wide range of atomic physics topics. The number of participants from around the world is limited to 100.

After this, Sean and Prof. Peter Engels attended the ICAP conference (7/23-27) where both presented posters on their current line of research.

After a successful conference, Sean and Peter then traveled to Hamburg, Germany to network and visit with Prof. Dr. Klaus Sengstock and members of his group at the Institute for Laser Physics at University of Hamburg.

Graduate student Maren Mossman attended the Coherent Control of Complex Quantum Systems (C3QS) workshop at OIST in Okinawa, Japan.  She presented her work on the generation of quantum turbulence in an elongated BEC using a quantum mechanical piston.

Prof. Peter Engels and graduate student Maren Mossman attended the 2018 NASA Fundamental Physics Workshop in La Jolla, CA.  At the workshop, Maren presented her poster on “Quantum Droplets in Microgravity” as a proposal for future experiments in microgravity.

Graduate student Maren Mossman represented the Physics & Astronomy department at the 3 Minute Thesis (3MT) competition for the College of Arts & Sciences at WSU.  Though she did not win, she did an excellent job in describing the complex physics we do at the FQP lab in a clear and concise way.  Way to represent the department and the group, Maren!

Graduate student Maren Mossman was featured on the SPIE’s #FacesOfPhotonics campaign.  During the course of the week, SPIE shared three posts on social media outlets (Facebook, Twitter, and Instagram) detailing Maren’s favorite outreach experience, the work she does in the FQP lab, and her advice to the STEM community.  She hopes that this exposure will get people excited about cold atoms and encourage more women to pursue science as a career. Congrats Maren!

Our group was very excited to host Nobel Laureate Prof. Bill Phillips for a S. Town Stephenson lecture this spring! Only the most distinguished of speakers are asked to come give a Stephenson lecture, where the science in the talk is geared towards the general public.  Prof. Phillips filled up our large physics lecture hall with families to give an hour long demo show.  Since the show, we have received many comments from parents telling us how much fun it was for their children (and for them!) to spend the evening learning about science!  Thanks again to Prof. Phillips for coming to visit and treating the families on the Palouse to a spectacular show! 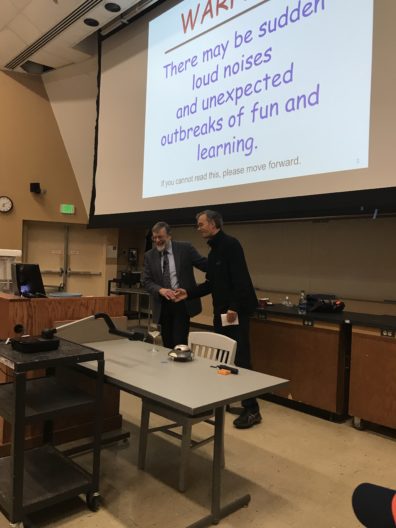 Graduate student Thomas M. Bersano traveled to Okinawa, Japan for the CQD summer school at OIST. While there, he presented a poster on his research: Supersolid-like States in a Spin-Orbit Coupled Bose-Einstein Condensate. Way to represent our group, Thomas!

Prof. Peter Engels, PostDoc Dr. Sean Mossman, and graduate student Maren Mossman volunteered with the WSU College of Arts and Sciences to help students safely view the solar eclipse and serve as “local experts” on the science behind the event.

WELCOME to our new PostDoc, Dr. Sean Mossman, who is joining us from Prof. Mark Kuzyk’s group at WSU, where he earned his PhD this past summer.  Some of Sean’s prior work involves numerical models and theory including the optimization of the nonlinear optical response of quantum systems and applications to material design.  Sean is excited to broaden his experience with different applications of quantum mechanics as well as to bring a different perspective to our cold-atom playground.  Welcome Sean!

At the DAMOP Banquet, Prof. Peter Engels was granted his APS Fellow Award for his work at WSU.  The citation for his award reads: “For pioneering experimental studies in superfluid hydrodynamics and other work in Bose-Einstein condensation.”  Congratulations to Peter!

Graduate students Thomas Bersano and Chunde Huang attended the 18th Annual Meeting of the APS Northwest Section at Pacific University in Forest Grove, OR.  Both of them presented on their research.  Thomas presented his work on a supersolid-like state in a spin-orbit coupled BEC and Chunde presented his work into arbitrary dipole potentials.  Please see the Publications page for more information.

This work was featured in a WSU News press release and has since gained more press, most recently from BBC News.  Other prominent places where this work has been featured are LiveScience News, Phys.org, The Telegraph (UK news source), Spiegel (German news source), NewsWeek, ScienceAlert, The Guardian, Science World Report, as well as others. 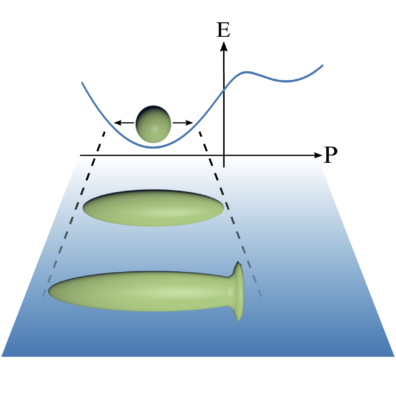 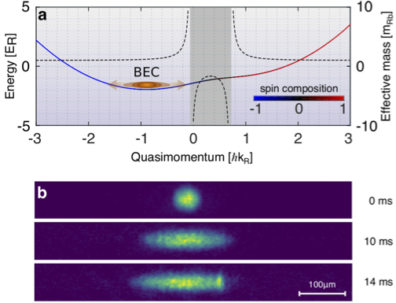 Congratulations to Dr. Peter Engels for recently being awarded WSU’s 2017 College of Arts and Sciences Mid-Career Achievement Award! His hard work and dedication in the lab has not gone unnoticed.  The group, as well as the entire WSU Physics department, says congratulations and looks forward to the CAS Appreciation and Recognition Social this April! 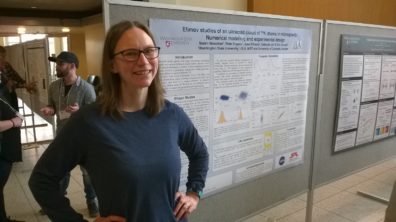 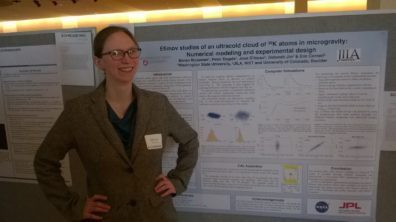 Congratulations to graduate student Amin Khamehchi on the successful defense of his PhD!  Amin completed his dissertation and oral presentation on his research into modified dispersion relations and spin-orbit coupling in BECs.  His presentation was entitled “Dispersion engineering of Bose-Einstein condensates.”  Congratulations Dr. Khamehchi and good luck in your future endeavors!

Congratulations to Dr. Peter Engels for recently being elected an APS (American Physical Society) Fellow! His hard work and dedication in the lab has not gone unnoticed.  The group, as well as the entire WSU Physics department, says congratulations!

Click Here to be taking to the WSU News article about Peter’s APS Fellow status.

Congratulations to graduate student Chunde Huang on the successful defense of his Masters of Science (MS) degree in Physics.  Chunde presented his work on a Digital Micromirror Device (DMD) for implementation in cold atom experiments at WSU.  Congratulations Chunde!

Congratulations to Justin Niedermeyer for his spotlight article on the WSU home page!

Congratulations to Amin Khamehchi on receiving the Leon J. and Barbara W. Radziemski Graduate Fellowship in the Sciences! This fellowship was founded to reward academic excellence for graduate students in the math and physical sciences.  There are only two fellowships awarded for the summer of 2016.  Congratulations Amin!

Congratulations to Justin Niedermeyer on his recent Undergraduate Honors Thesis Defense!  Justin has received a Fulbright Award to work as a Research Assistant in Germany for 10 months beginning in September of this year.  Once he has completed his Fulbright, Justin will be pursuing his graduate studies at The University of Colorado in Boulder studying ultracold atomic physics.  To see more on Justin’s achievements, you can click here.  Congratulations again Justin! We are looking forward to seeing great things from you!

Justin Niedermeyer has been awarded the Fulbright scholarship to pursue research opportunities in Germany for one year!  For more information on this prestigious award, see the Fulbright U.S. Student Program.  Congratulations Justin!

Dr. Peter Engels and graduate student, Maren Mossman, travelled to the Jet Propulsion Laboratory (JPL) in Pasadena, CA for the Science Concept Review for the Cold Atom Laboratory (CAL) project.  They were joined by two important members of the collaboration effort, Nobel Laureate Dr. Eric Cornell and few-body theorist Dr. Jose D’Incao.  During the SCR, all members of the collaboration in attendance presented to the SCR committee, JPL scientists, and NASA HQ members.  Dr. Engels and Maren specifically presented on their recent efforts in regards to atom simulations and calculations for the project.  Congratulations to Peter and Maren for their successful trip to JPL!

Our new machine is now moving at full tilt producing Rb BECs. The machine employs a 2D MOT loading into a 3D MOT, followed by the atoms being magnetically transferred into a science chamber, 2.5 sec evaporation in a steep quadrupole trap, adiabatic transfer into a bow-tie crossed dipole trap, and 5 sec dipole trap evaporation to reach pure BECs.  Currently, we are generating Rb-87 BECs at a rate of 30 seconds per condensate.  Once everything is in place (we aren’t done quite yet!) and optimized, we look forward to preforming exciting new experiments!

WELCOME to our new PostDoc, Dr. Vandna Gokhroo, who is joining us from the Okinawa Institute of Science and Technology Graduate University (OIST) in Japan, where she worked as a PostDoc researcher for 3 years.  Some of Vandna’s prior work involves sub-doppler cooling mechanisms in 39-K (see here).  Vandna will be joining our little cold atom family for a year and we look forward to learning as much as we can from her!  Welcome!

CONGRATULATIONS to Justin Niedermeyer on winning the Goldwater Scholarship this year!  The Goldwater Scholarship is the most prestigious undergraduate award given in the sciences and thus presents an outstanding achievement.  To read more about Justin’s accomplishments, click here to be linked to the WSU Honors College article.  Way to represent cold atoms, Justin!