NASA’s Cold Atom Laboratory (CAL) is the first ever of its kind. That is to say that this is the first atomic physics experiment ever to catch a ride on the International Space Station and live in a perpetual microgravity environment. Built by scientists and engineers at the Jet Propulsion Laboratory in Pasadena, CA, CAL is a user facility for five independent research teams. The Fundamental Physics Lab at WSU is a key member in one of these high profile research teams, the Ultracold Few-Body Physics Team, directing experiments on CAL in space (the flight team). Along with Nobel Laureate Prof. Eric Cornell at CU Boulder, Prof. Jose D’Incao at CU Boulder, and Prof. Maren Mossman and University of San Diego, Prof. Peter Engels and company work to perform experiments that will help us to understand the physics of few-body systems. In particular, the Ultracold Few-Body Physics Team is interested in creating and investigating Efimov trimers, which are very fragile and weakly bound three-body systems that exists in regimes where two-body bound states are hard to find.

The most intriguing part of these Efimov bound states is that there is an infinite series of them at increasing interaction strength, aka as the interaction strength, or scattering length a, between the atoms is increased to a specific value, a_0, the ground Efimov state can be observed. Increasing the scattering length even more by a constant factor (for three identical bosons at zero temperature, this factor is universally calculated to be 22.7), another trimer is formed, called the first excited Efimov state! Going further, there is an infinite series of these trimer bound states formed at (22.7)^n times the position of the ground Efimov state, a_0. This behavior is called a universal geometric scaling law. What this means is that, no matter the isotope, if the ground Efimov state has atoms that are a_0 apart spatially, then the first excited state has atoms that are 22.7 times apart, and so on and so forth!

These delicate states have been observed in ground-based studies, but these types of studies also experience strong variations due to temperature and density effects. To observe the first excited Efimov state without runaway atom losses, one must create atoms that are at extremely low temperatures (< 1nK) and low densities (< 10^9 atoms/cm^3). This is where microgravity comes in! Not only does microgravity allow for extremely low densities by allowing atoms to expand freely without being lost to the bottom of the glass cell, microgravity allows us to perform a cooling technique known as delta-kick cooling.

An example of this technique can be seen in the above GIFs (click to see the simulation!), where atoms have been prepared in a spherically symmetric magnetic trap. The color of each atom represents its “temperature” based on the velocity distribution of the atom. The atoms move around in the trap for a bit before the trap is suddenly jumped off. In gravity, the center of mass of the atoms would be accelerating down at a rate of 9.81 m/s^2 as the atoms expand, but in microgravity, the center of mass of the atoms stays in the same place relative to the apparatus. After a certain amount of time, the same spherical magnetic trap is applied to the atoms again, applying a force on the atoms that varies spatially: a strong force to the atoms far from the center of mass, moving out at higher speeds; and a weak force to the atoms near the center of the distribution, already at relatively low velocities. You can see that when the “kick” happens, all of the atoms turn blue, as they are now in the 1nK and below regime. This can also be seen in the phase space diagram of the same system.

December 2019: an early morning at Kennedy Space Center, Cape Canaveral, to watch the launch of the upgraded science module SM3

Eric and Peter at the launch pad: 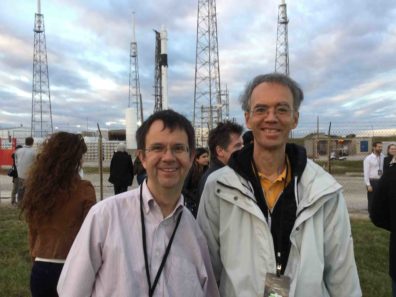 Group picture with the colleagues from JPL: 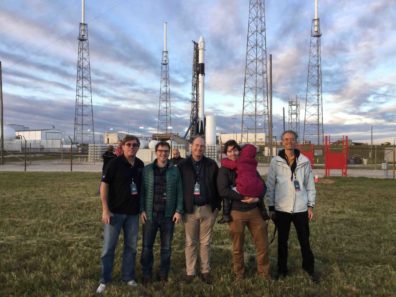 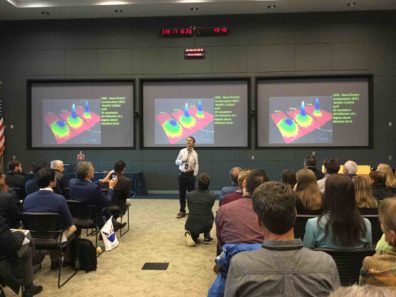 Outside on the viewing platform before the launch: 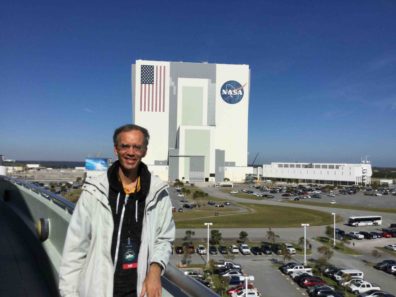 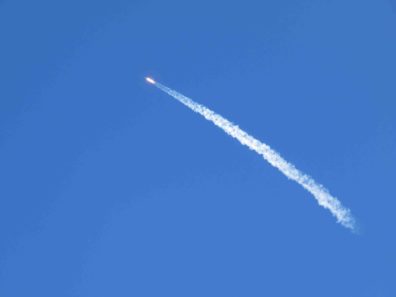 A view from the past: Atlantis on display at the visitor center 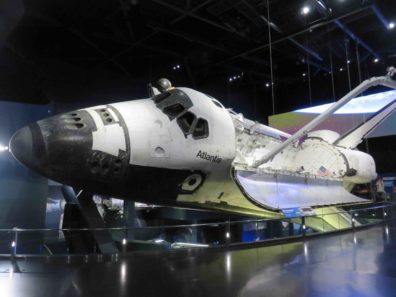 End of a great day at Cape Canaveral: 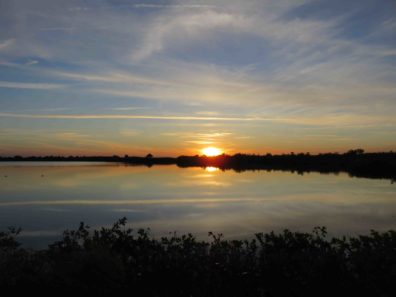