Brian Lamb (left) and Patrick O’Keeffe install equipment at the new Urbanova Reference Site on the WSU Spokane campus. The instrumentation at this site measure various quantities that are important for air quality. The instrumentation will also be used to calibrate and validate other smart city sensors that are being deployed in the Spokane University District as part of Urbanova. 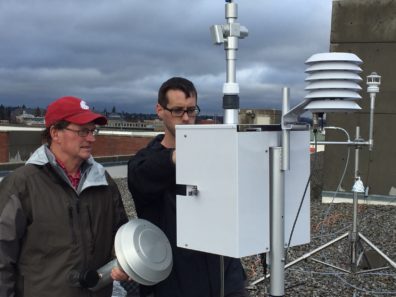 LAR’s participation in the Urbanova project was recently featured in an article in Government Technology, Washington’s ‘Living Laboratory’ to Build Out Its Sensor Network. Check it out !

I love using Python. It’s a great programming language, and I use it for all kinds of different things. Data analysis, programming drones, mining Twitter, … Over the years, I’ve accumulated a ton of great information on Python. People started asking me for this information, so I now keep it in a digital notebook from which I can generate a digital copy. Check out my Python notes on my website.

Check out this article from the Spokesman Review from December 6th, 2017. It describes smart cities research in Spokane and the air quality sensors that LAR developed and deploy.

We’re beginning an exciting project here at LAR to build autonomous sensors for indoor and outdoor air quality networks. Below is an image of a Raspberry Pi computer (left) attached to a cellular phone. The green cellphone antenna and the white GPS antenna are connected to the phone. The little red square on the right is actually a temperature, pressure, and humidity sensor. We’ll be pulling this together as a single package soon, and will be testing how the sensor acquires data and transfers it back to a server here in the lab. We hope to integrate ozone, carbon monoxide, and particulate matter sensors too. Cool stuff! Had a great time last spring (May-June 2015) participating in the Norwegian Young Sea Ice experiment. I spent three weeks on the R/V Lance with a very international group of crew and researchers, studying how atmospheric conditions affect young, thin sea ice. This was the first time that I had worked on thin ice, and, wow, some of it was really thin. We made measurements on a refrozen lead that was only 22 cm thick. Keep an eye out for upcoming publications from our group!