Snake robots are an emerging approach for navigating complicated and constrained environments. While existing snake robots rely on traditional articulated joints, we have been investigating the use of soft robotic modules which can allow for better compliance with the environment. In this article, we present the first soft-material snake robot capable of non-planar locomotion. We performed experiments on the modules that make up the snake robot to determine the ideal material, settling on Ecoflex 0050. Combining 4 modules into the full soft snake, we performed locomotion experiments using both serpentine and sidewinding gaits. We determined that its maximum speed under serpentine locomotion was 131.6 mm/s (0.25 body lengths per second) while under sidewinding it was 65.2 mm/s (0.12 body lengths per second). Finally, we tested these gaits on other surfaces and found that the sidewinding could move more reliably on different surfaces.

Snake robotics is an important research topic with a wide range of applications, including inspection in confined spaces, search-and-rescue, and disaster response. Snake robots are well-suited to these applications because of their versatility and adaptability to unstructured and constrained environments. In this paper, we introduce a soft pneumatic robotic snake that can imitate the capabilities of biological snakes, its soft body can provide flexibility and adaptability to the environment. This paper combines soft mobile robot modeling, proprioceptive feedback control, and motion planning to pave the way for functional soft robotic snake autonomy. We propose a pressure-operated soft robotic snake with a high degree of modularity that makes use of customized embedded flexible curvature sensing. On this platform, we introduce the use of iterative learning control using feedback from the on-board curvature sensors to enable the snake to automatically correct its gait for superior locomotion. We also present a motion planning and trajectory tracking algorithm using an adaptive bounding box, which allows for efficient motion planning that still takes into account the kinematic state of the soft robotic snake. We test this algorithm experimentally, and demonstrate its performance in obstacle avoidance scenarios.

Real-world environments are complex, unstructured, and often fragile. Soft robotics offers a solution for robots to safely interact with the environment and human coworkers, but suffers from a host of challenges in sensing and control of continuously deformable bodies. To overcome these challenges, this article considers a modular soft robotic architecture that offers proprioceptive sensing of pressure-operated bending actuation modules. We present integrated custom magnetic curvature sensors embedded in the neutral axis of bidirectional bending actuators. We describe our recent advances in the design and fabrication of these modules to improve the reliability of proprioceptive curvature feedback over our prior work. In particular, we study the effect of dimensional parameters on improving the linearity of curvature measurements. In addition, we present a sliding-mode controller formulation that drives the binary solenoid valve states directly, giving the control system the ability to hold the actuator steady without continuous pressurization and depressurization. In comparison to other methods, this control approach does not rely on pulse width modulation and hence offers superior dynamic performance (i.e., faster response rates). Our experimental results indicate that the proposed soft robotic modules offer a large range of bending angles with monotonic and more linear embedded curvature measurements, and that the direct sliding-mode control system exhibits improved bandwidth and a notable reduction in binary valve actuation operations compared to our earlier iterative sliding-mode controller. 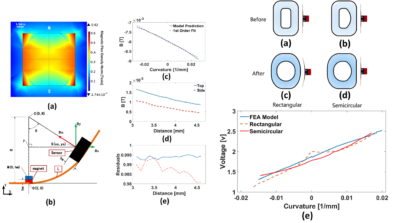 Soft robotic snakes promise significant advantages in achieving traveling curvature waves with reduced number of active segments as well as a safe and adaptive interaction with the environment and human users. However, current soft robot platforms suffer from a lack of accurate theoretical dynamic models and proprioceptive measurements, which impedes advancements toward full autonomy. To address this gap, this paper details our recent results on the design, fabrication, and experimental evaluation of a new-generation pressure-operated soft robotic snake platform we call the WPI SRS, which employs custom magnetic sensors embedded in a flexible backbone to continuously monitor the curvature of each of its four bidirectional bending segments. In addition, we present a complete and accurate dynamic undulatory locomotion model that accounts for the propagation of frictional moments to describe linear and rotational motions of the SRS. Experimental studies indicate that on-board sensory measurements provide accurate real-time curvature feedback and numerical simulations offer a level of abstraction for lateral undulation under ideal conditions.

Our pressure-operated soft snake robot promises inherent flexibility and versatility to operate on complex and unpredictable environments compared to traditional snake robots made of rigid linkage chains. We previously presented a theoretical framework to describe its unique dynamic behavior and experimentally verified the accuracy of this model. This previous work had some drawbacks; the maximum center of mass velocity of the previous soft snake was one tenth its body length per second and the dynamic model could not predict the behavior of the robot when following non-linear trajectories because of a lack of frictional torques. In this paper we introduce the next generation of our soft robotic snake, tagged “WPI SRS”, which can locomote ten times faster than the previous version. Additionally, we present refinements to the dynamical model that can predict both linear and rotational motions of the robot. Finally, we study the accuracy of this refined model through experimentation.

A new generation of fluidic elastomer actuators (FEAs) that offer bidirectional bending developed as motion segments of a pressure-operated soft robotic snake. Our prior work on FEAs has identified a number of limitations, namely a high center of gravity, narrow base, slow dynamics, and a small range of pressure inputs. We developed two versions of FEAs based on an improved design concept with different geometric parameters and characterized their dynamic response under a custom visual tracking system. Compared with the previous actuators, the FEAs developed in this work offer robust operation, safety at larger input pressure values, faster response, lower center of gravity and a flat bottom for better compatibility for snake-like undulatory locomotion.

For a mobile robot undergoing serpentine locomotion, an accurate dynamic model is a fundamental requirement for optimization, control, navigation, and learning algorithms. Such algorithms can be readily implemented for traditional rigid robots, but remain a challenge for nonlinear and low-bandwidth soft robotic systems. This article addresses the theoretical modeling of the dynamics of a pressure-operated soft snake robot. A general framework is detailed to solve the 2D modeling problem of a soft snake robot, which is applicable to most pressure-operated soft robots developed by a modular kinematic arrangement of bending-type fluidic elastomer actuators. The model is simulated using measured physical parameters of a soft snake robot prototype. The theoretical results are verified through a detailed comparison to locomotion experiments on a flat surface with measured frictional properties. Experimental results confirm that the proposed model describes the motion of the robot accurately.