We study mutualisms–cooperative interactions between species–and their impacts on evolutionary processes and ecological dynamics.

Plant and animal hosts are colonized by diverse microbes, many of which can provide benefits to their host, and derive benefit themselves. However, these relationships are dynamic: cooperation can be destabiliized over evolutionary time and the ecological impacts of cooperation can change due to shifting conditions.

Our lab explores the evolutionary and ecological dynamics of plants and their beneficial microbial associates to test fundamental theory about cooperative interactions. We focus on environmentally acquired symbioses between plants and microbial mutualists such as nitrogen-fixing rhizobium bacteria. Our research projects range from the field, to the lab to the greenhouse and integrate a variety of approaches from quantitative genetics, ecological genetics and genomics. 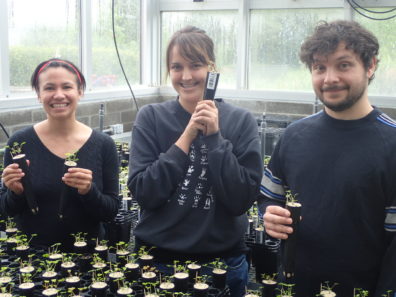 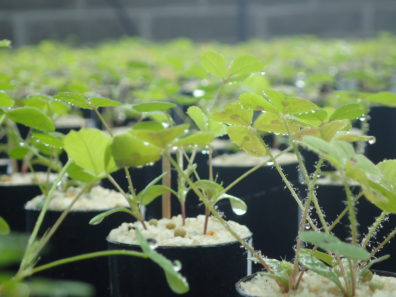 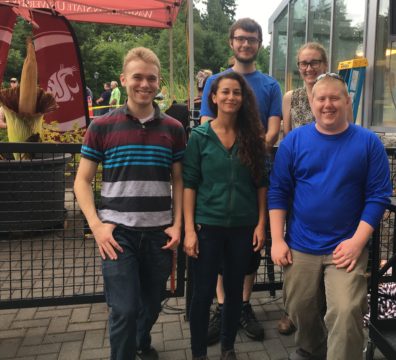 Today, WSU’s corpse flower (Amorphophallus titanum), named Titan Vancoug, bloomed just outside of the Porter Lab Greenhouse! The corpse flower is thought to have the largest unbranched inflorescence of any plant species and smells strongly of rotting meat when it blooms. Hundreds of people came to catch a glimpse before the flower dies in less than 48 hours because it won’t bloom again for another 7 – 10 years. Since we work at the university, we got to skip the long line of onlookers and get within a few feet of the beautiful bloom. That’s just one of the many benefits of being a researcher! (Photographed front row from left: Miles, Angeliqua, Chris. Back row from left: Niall, Camille) 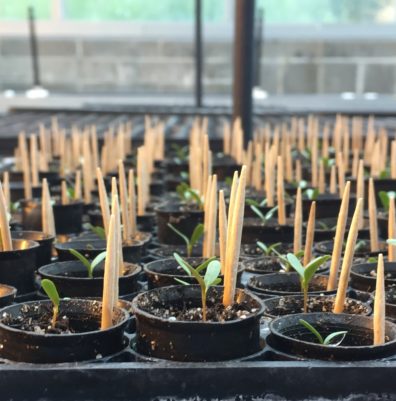 It is the beginning of the end. Today we launched one final experiment into host range restriction peptidase (hrrP), a bacterial gene that is thought to allow some rhizobia to “cheat” on their plant hosts. In a previous greenhouse experiment, we found that the presence of active hrrP had variable effects on plant and rhizobia fitness. Now, our collaborators have complemented our hrrP knockout strains with a functional copy of hrrP. If we observe an hrrP + phenotype in this experiment, then that will be strong evidence that the effects viewed in the previous experiment were due to hrrP. 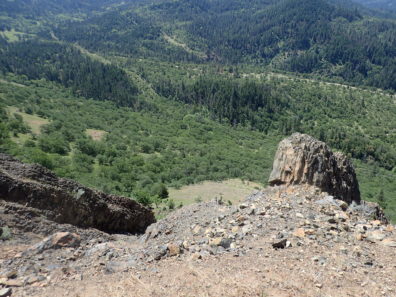 Angeliqua and Miles took a trip down to Ashland, Oregon to survey populations of Acmispon wrangelianus and Acmispon brachyacarpus. They had an adventurous time trecking through fields, climbing rockfaces, and tiptoeing near cliffsides (Don’t worry, we are trained professionals)! These populations were farther north than any other populations that our lab has previously surveyed and will hopefully prove to be valuable in our future projects. 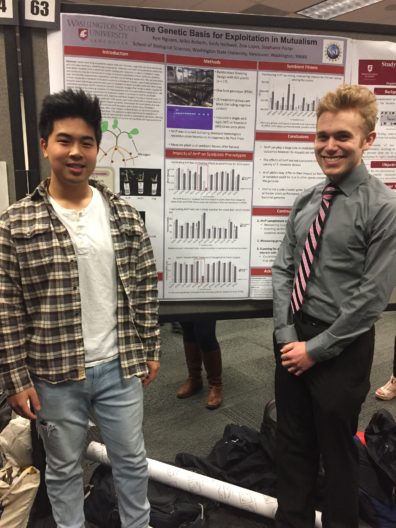 Kyle and Miles (collectively known as Kyles) did a great job representing our lab at WSUV’s largest Research Showcase to date. They are pictured standing in front of a project they worked on together and Kyle presented. This project examined the effect of the rhizobial gene, host range restriction peptidase, on the fitness of Medicago polymorpha. Miles, on the other hand, presented his work on which rhizobial growth traits contributed to nickel tolerance. 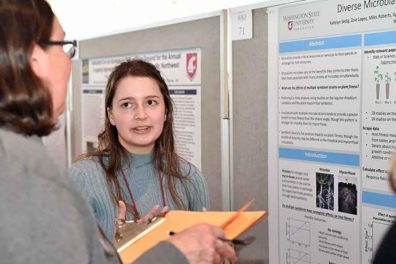 Miles, Jordan, and Katelyn continued their marathon of poster presentations today at the Symposium for Undergraduate Research and Creative Activities (SURCA). This is a WSU-hosted event where undergraduates from all WSU campuses gather at the main Pullman campus to discuss research and get feedback from judges. Miles, Jordan, and Katelyn met several inspiring undergrads with projects in engineering, rocket science, psychology, creative writing, and almost every other field imaginable. At the end of the day, Katelyn even walked away with a Crimson Award in Organismal, Population, Ecological, and Evolutionary Biology; which is the highest honor awarded at SURCA! 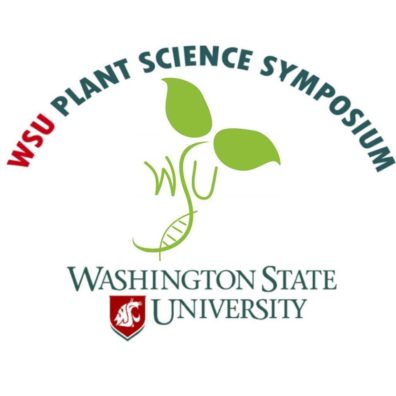 Our whole lab had a wonderful time attending WSU’s annual Plant Science Symposium. We enjoyed hearing from a large number of graduate students and world-renowned faculty on their breakthroughs in everything from engineering photosynthesis and spectroscopic analysis to the introduction of novel fruits to consumers. Niall gave a talk on his Ph.D. research regarding the effects of legume domestication on rhizobium dependence. Kyle, Miles, Katelyn, and Jordan also presented posters on their various projects. Jordan and Miles even walked away with prizes! 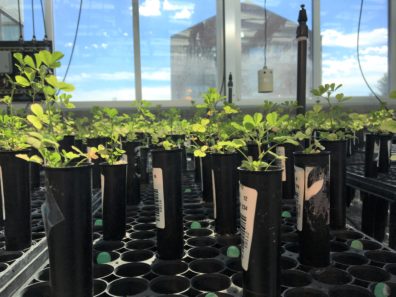 Our undergrads Kyle and Miles are almost ready to harvest plants from their first greenhouse experiment! 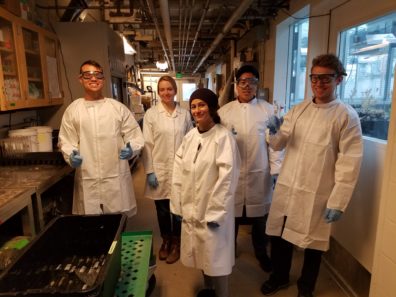 All hands on deck to clean out the greenhouse in preparation for upcoming experiments. Our new interns got a crash course on proper PPE! Up next, Niall will be looking at how domestication affects legume dependence on rhizobia in different soil nitrogen conditions.  –Zoie 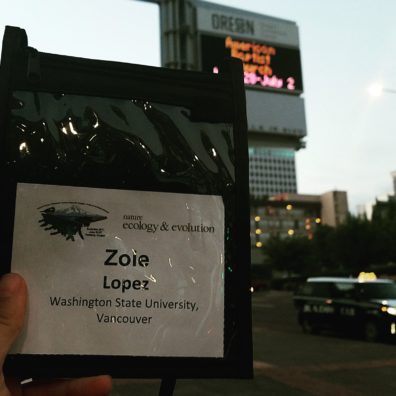 The Porter Lab had a great time at the Evolution conference in Portland! This was my first conference and my first professional talk. We had a great time meeting and reconnecting with scientists in the field and friends from previous institutions and labs. It was really inspiring to learn first-hand about how other labs are thinking about evolution within plant-microbe mutualisms, and it certainly helped us think about where we want to take our own research. — Zoie 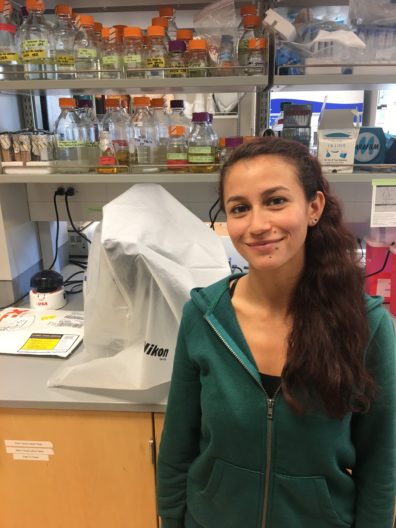 Meet the newest research technician assistant Angeliqua! Angeliqua is a current undergraduate student here at WSUV. She is excited to gain research experience in the Porter Lab, and further her knowledge and hands-on skills among a scientific team. Her role in the lab will be to help assist the transition from the most recent project in the greenhouse, the common garden, and begin the next one! 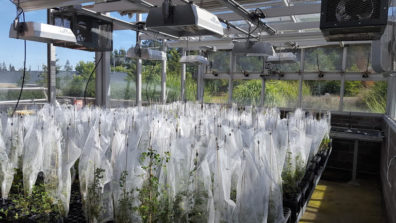 Summer is coming to an end and so is our common garden as most of the plants begin to senesce. We have begun harvesting the pods from all of the plants grown.

Our REU students wrapped up their summer projects by showcasing their results at the 2016 Summer REU Poster Symposium.

Danaka researched whether Burr Clover (Medicago polymorpha) exhibit a clinal relationship between latitude and flowering time in the native range. If so, does the invaded range display adaptive evolution through re-establishing the same flower time cline?  After collecting flowering data in our common garden, she discovered Burr Clover in the native range does display a latitudinal flowering cline.

She also found evidence that the cline is re-establishing in the invaded range, which could contribute to successful invasions. She also found that Burr Clover from lower latitudes flowered earlier than those from higher latitudes. You can read more about her project and view her poster by visiting: https://drive.google.com/file/d/0B7JQQUKMk5uVUmZraXlzT3RiRDQ/view?usp=sharing 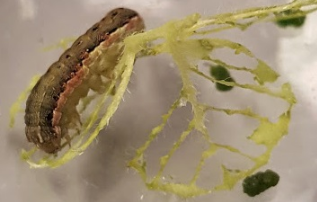 Cynthia investigated the inducible chemical defense mechanism in Medicago polymorpha (Burr Clover) and its role in the biological invasion of North America from the Burr Clover’s native range in Europe and North Africa.  The most notable result, based upon preliminary analysis of the data, is that Anticarsia gemmatalis (Velvetbean Caterpillar), the designated specialist herbivore, was shown to have a strong aversion to consuming tissues collected from the native range that had experienced a simulated herbivore attack.  The generalist species Chrysodeixis includens (Soybean Looper) seemed to be undeterred by any particular tissue with no distinction between the native or invaded range. To view her poster and results visit: https://drive.google.com/file/d/0B7JQQUKMk5uVMkZUUFlMOUdVYWs/view?usp=sharing 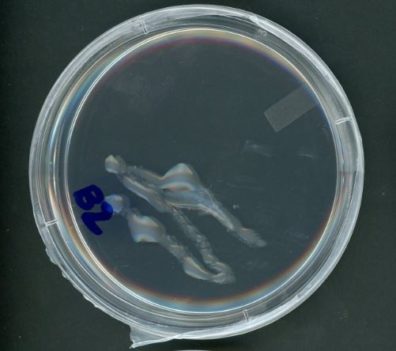 Kelsey spent the summer characterizing the diversity of rhizobia bacteria within the root systems of  Lupin plants that grow on volcanic soils. She collected plants from Mt. St. Helens, Mt. Hood, and Mt. Adams.  She discovered that a greater range of rhizobia diversity could be present on Mt. St. Helens and that  rhizobia was likely dispersed from Mt. St. Helens to Mt. Adams during the 1980 eruption.  She also found that different Lupines do not host Bradyrhizobium with different morphologies. To view her poster and read more on her project visit: https://drive.google.com/file/d/0B7JQQUKMk5uVcUtXVWswejNFaDg/view?usp=sharing 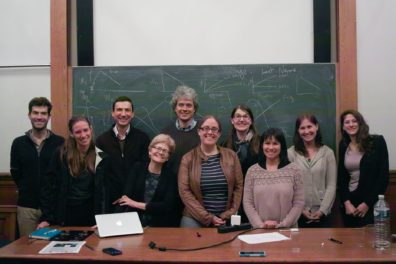 I was fortunate enough to attend “Cheating in Paris”, a recent symposium on “EXPLOITATION AND CHEATING IN MUTUALISM: SYNTHESES, CHALLENGES, & NEW DIRECTIONS“. The meeting was inspiring and highlights how much we still have to learn about how cooperation in natural systems is maintained, despite the potential for cheating instead. You can read more about the conference here: https://cheatinginparis.wordpress.com/. –Stephanie 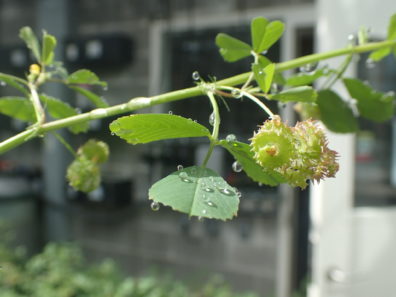 Burr clover and black medic plants in our greenhouse are starting to produce seed pods. Young pods are green and soft, but as they ripen they turn brown and tough. Tiny teeth that line the coiled edges are perfect for sticking to wandering animals and people, allowing them to spread to new habitats. 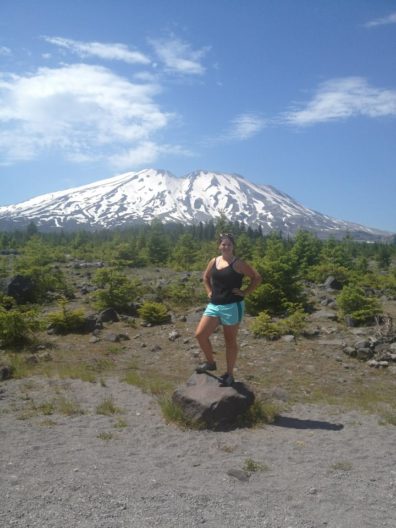 Meet our newest lab member, Danaka! Danaka just graduated from WSUV with her BS in Biology. A couple of her favorite classes were Cell Biology with Dr. Coffin and Evolution with Dr. Porter. She plans on gaining research experience in the coming year before applying to graduate school in the fall. She will start out as a volunteer in the lab and will assist with taking phenology (flowering) data for our current greenhouse project and preparing leaf tissue samples for isotopic nitrogen (15N) analysis. 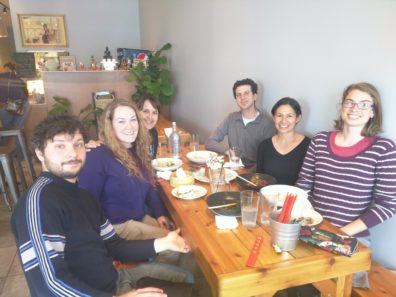 Last Friday, the Porter and Piovia-Scott labs tied up the last week of classes with Thai food! And we had a lot to celebrate with Dr. Porter and Dr. Piovia-Scott finishing their first year teaching at WSUV, Kim Cook completing her first year as a graduate student, and Zoie Lopez being accepted into a Plant Biology PhD program in the Porter lab. Additionally, the Piovia-Scott lab manager, Heather Kenny, will soon be leaving for Calgary, Canada to participate in field work studying the effects of oil and gas infrastructure on song birds. 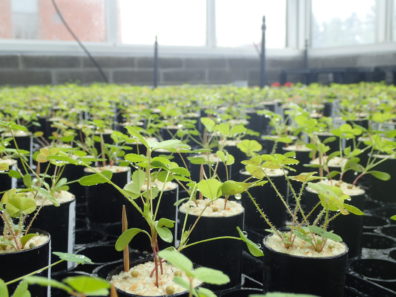 It certainly feels like spring in the Porter Greenhouse! 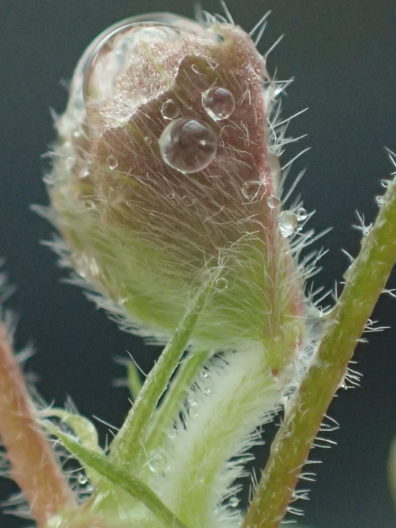 Our young plants are the perfect subjects to test out our new Olympus camera. This picture, showing a newly forming M. lupulina leaf, was taken using “Microscope” mode. These hairy seedlings distinguish the species from M. polymorpha, though plant hairs are not uncommon throughout the genus.