Our lab combines evolutionary ecology, quantitative genetics, and genomics to study mutualisms and environmental adaptation. Understanding how symbiotic partners co-evolve and adapt to different environments is ecologically and agriculturally important. For example, this will help us explain how cooperation is maintained in the symbiosis between plants and rhizobium bacteria, which is responsible for half of all current biologically fixed terrestrial nitrogen. In this symbiosis, host plants trade photosynthetically derived carbon for nitrogen fixed by endosymbiotic rhizobium bacteria housed in root nodules. 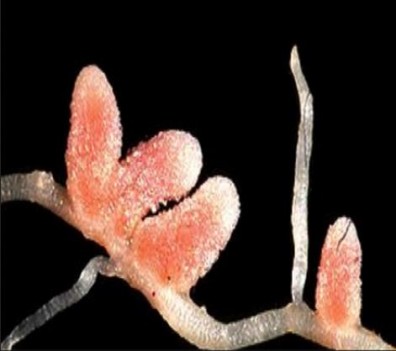 Are there conflicts between mutualists? 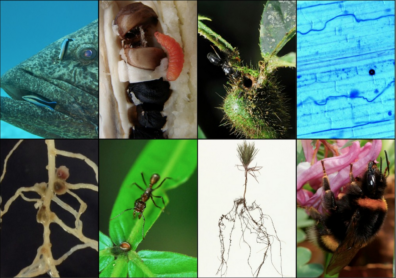 How are cooperative interactions between hosts and symbionts reshaped during biological invasions? 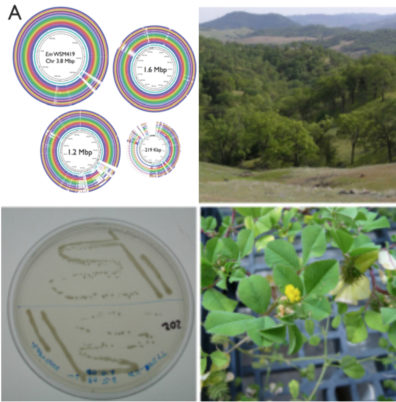 Co-invading Ensifer medicae and Medicago polymorpha in North America. The genome of E. medicae is remarkably similar in the native and invaded range. 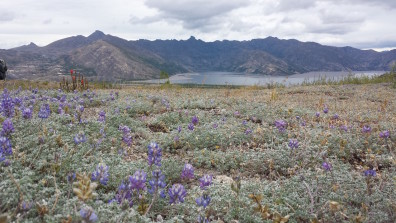 Lupine-Bradyrhizobium symbiosis in primary succession on the volcano.

How do symbiontic interactions impact local adaptation to the environment?

Local adaptation can occur at various hierarchical levels in the interaction:

We are integrating these findings to ask whether there are tradeoffs among adaptations expressed at different points in the interaction.

What explains the maintenance of the tremendous microbial diversity found in nature? Why doesn’t one “super-strain” take over? 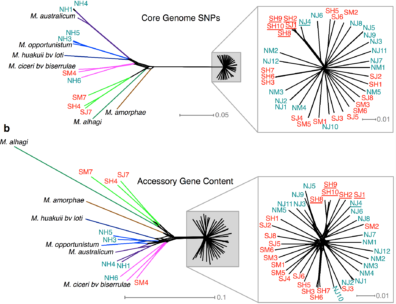 A generalist Mesorhizobium clade (insert) . We have identified genes correlated with nickel tolerance that are common from serpentine soil strains (red) but are rare in non-serpentine strains (blue).

Candidate genes for nickel tolerance (rainbow colors) are clustered in the genome into modules that assort perfectly with a strain’s soil type of origin and appear to be involved in metal efflux.