The biological process of wound healing in the skin normally results in the formation of a scar which isn’t typically a problem if the wounds are small, minor cuts. However, individuals with deep wounds covering larger portions of their body would be greatly affected and significantly benefit if their skin fully regenerated. Current medical procedures do not have the ability to reform hair follicles and sweat glands from these types of wounds. Skin grafts would be an option except they only replace the outermost layers of the skin, the epidermis. With the loss of hair follicles and sweat glands in wounded skin, the skin loses the ability to heal properly and instead has the formation of scar tissue. 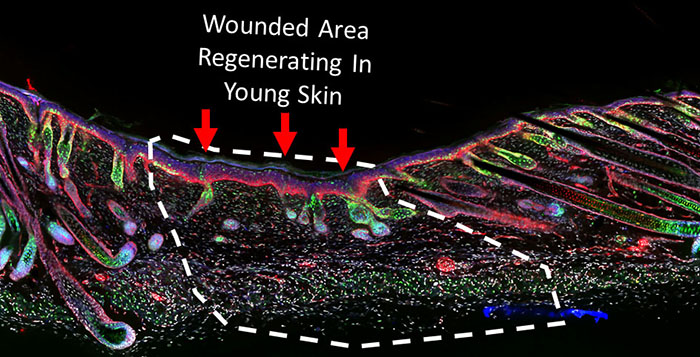 Scar formation in the skin begins with wound infliction followed by the wounded area being filled with many cells of different types. This includes migrating blood, mesenchymal cells (fibroblasts), and epithelial cells. All these cells interact to form new tissue to replace what was lost from the wounded area of skin. The combination of spatial and temporal interactions is critical in the formation of the new tissue which often results in the formation of a scar. It is possible to modulate the repair process and influence the quality of the repair by controlling epithelial cells and fibroblasts as they enter the blood clot.

We have recently discovered that by controlling the nature of fibroblasts before and after wounding of the skin we can influence hair regeneration which is an essential part of skin regeneration (Driskell et al. 2013 – Nature). In addition to this, we found the reason that skin normally lack hair. This is because adult skin lacks fibroblasts subtypes that support hair follicle regeneration. In comparison, young (neonatal) dermis has the critical cells required for hair follicle neogenesis and the potential to be induced or replicated by increasing Wnt signaling in the epidermis before wounding (Driskell et al. 2013; Rognoni et al. 2016). With these advances, our findings revealed a need to investigate the mechanisms that control the type of hair follicle regeneration in the wound as well as its ability to function.