It has been an exciting spring in the lab! We wanted to acknowledge the awards that several students and postdocs received this spring.

Anthony Brown received the James R. King Graduate Fellowship from the School of Biological Sciences to fund his research and part of his stipend this summer!

Luana Lins received a scholarship to the Summer Institute in Statistical Genetics at University of Washington this summer and a travel award from the Society for the Study of Evolution to attend Evolution 2017!

Samantha Kallinen received the Undergraduate Summer Minigrant from the College of Arts and Sciences to support her research over the summer!

Allegra Sundstrom received the Youth Activity Fund award from the Explorer’s Club and a School of Biological Sciences research award to conduct research in Alaska this summer! 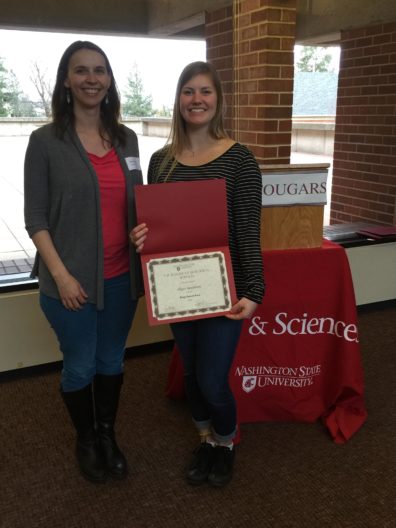 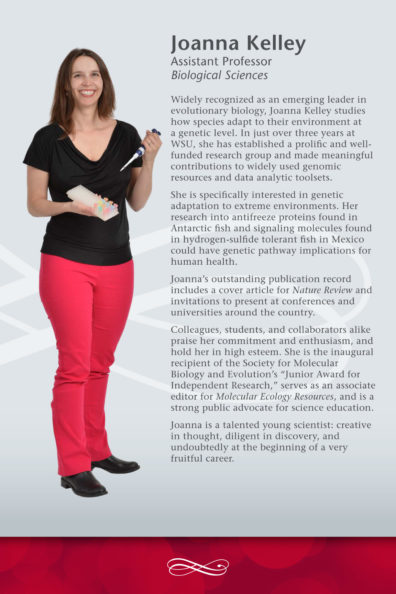 Congratulations to Shawn for receiving the NSF Graduate Research Fellowship Program (GRFP)! We are thrilled for Shawn. This is a fantastic testament to his accomplishments and promise as a graduate student! “The NSF Graduate Research Fellowship Program recognizes and supports outstanding graduate students in NSF-supported science, technology, engineering, and mathematics disciplines who are pursuing research-based Master’s and doctoral degrees at accredited United States institutions… For the 2017 competition, NSF received over 13,000 applications, and made 2,000 award offers.” from https://www.nsfgrfp.org/. Anthony Brown, PhD candidate at WSU, and Joanna Kelley had the pleasure of attending Ecological Genomics 2016 symposium in Kansas City, MO. #EGSym2016 The conference was fantastic! Anthony presented new work titled “Genome-scale data reveals that endemic Poecilia populations from small sulfidic springs are more diverse and less inbred than populations undergoing range reduction” and Joanna presented about “Genomics in extreme environments: organisms overwintering in polar environments”. There was a vast range of talks at Ecological Genomics 2016, including different questions under the umbrella of ecological genomics, different approaches, and many interesting study systems. We are looking forward to #EGSym2017 Allegra Sundstrom has been selected as a recipient of an Auvil Scholars Fellowship for the 2016/2017 academic year. This fund was created by a 2006 gift from the estates of Grady and Lillie Auvil, Wenatchee tree-fruit entrepreneurs. Grady Auvil believed in the importance of education and research. He was instrumental in establishing the Washington Tree Fruit Research Commission in 1968, and his work introduced many new fruits and innovations beneficial to growers. Throughout his life, he and his wife contributed generously to the WSU community, and this fund serves as a continuation of that legacy. Congratulations to all of the undergraduates who received research awards this year! https://news.wsu.edu/2016/11/03/25-undergraduate-research-awards/

I recently had the distinct pleasure of traveling to Katmai National Park in Alaska to view brown bears. Michael Saxton, PhD candidate in the Robbins and Kelley labs, spends his time as a graduate student and a ranger at Katmai National Park. We are studying the genetic structure and relatedness of bears that visit Brooks Falls each year. Michael is collecting samples this summer for the study. We are also studying how gene regulation changes during hibernation at the WSU Bear Center. Our Computational Challenges in Landscape Genomics Working Group at the National Institute for Mathematical and Biological Synthesis (NIMBIOS) wrote a review about detecting local adaptation using genome-scale datasets. In the review, we highlight caveats and considerations. The review is open-access at The American Naturalist. Link to a related highlight at NIMBIOS. We are thrilled to see the paper in press and hope that future genome-scans for local adaptation will take some of our recommendations into consideration. We are thrilled that our review on marine vertebrate genomics is online! The review inspired the cover of this month’s Nature Reviews Genetics. The invited review was a collaboration between Andy Foote, Nina Overgaard Therkildsen, Anthony Brown (PhD student in my laboratory) and me. It went through many iterations before this version. We hadn’t worked together before so it was a lot of fun getting to know each other while crafting the review. I snapped a photo of one of our many skype conversations.