The map displaying the civility scores was developed by Luke Fowler, Stephanie Witt and Jaclyn Cutler at Boise State.  The explanation for the map (which should accompany it) is found in Chapter 8, and reads as follows: 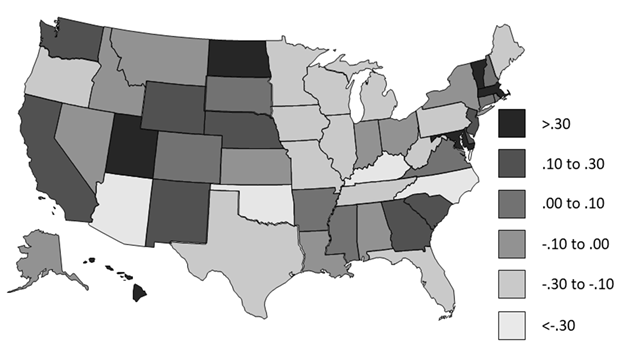 Figure 1 illustrates the distribution of the civility index across states; states are subdivided into six categories using natural breaks.  States with the highest civility index scores (i.e., highest levels of civility) are Massachusetts, Maryland, Utah, North Dakota, Hawaii, and Vermont, while states with the lowest index scores are Kentucky, Arizona, North Carolina, and Oklahoma.  Although visual analyses do not indicate any specific geographic patterns, regional averages indicate that the Northeast (.07) and West (.08) are more civil than the South (-.07) and Midwest (-.05).  Of course, there are some noteworthy outliers to these overall trends.  For example, North Dakota in the Midwest and Maryland in the South have among the highest levels of civility within regions with relatively low levels, while Pennsylvania and Maine in the Northeast, and Arizona and Oregon in the West have among the lowest levels of civility in regions with relatively high levels.  Looking further at subregions, New England (.13 for Connecticut, Maine, Massachusetts, New Hampshire, Rhode Island, and Vermont) and the Pacific states (.10 for Alaska, California, Hawaii, Oregon, and Washington) have the highest averages.  In contrast, the West South Central (-.17 for Arkansas, Louisiana, Oklahoma, and Texas), East North Central (-.16 for Illinois, Indiana, Michigan, Ohio, and Wisconsin), and East South Central (-.14 for Alabama, Kentucky, Mississippi, and Tennessee) have the lowest averages.