Canoe Families from around the Pacific Northwest are regular participants in actions to stop fossil fuel infrastructure from entering or expanding in the region. Traditional Canoe Journeys were reclaimed as a cultural tradition in the 1990s. Every summer in July and August,  thousands of Indigenous people from around the region–and around the world–take to the waters of the Pacific Northwest for weeks of paddling, ceremonies and inter-tribal gatherings and potlatches. Learn more about the traditions, practices and protocol in this handbook. Many Tribal Nations publish variations on the handbook, tailoring it to their own traditions. 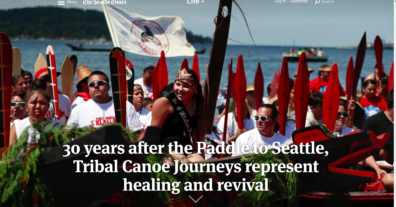 Paddle Power Manual: The Theory and Tactics of Kayaktivism

One of the largest and most visible canoe and kayak action to date, Pacific Northwest activists converged on Seattle to try to prevent Shell’s Polar Pioneer ice-breaker from leaving the Port of Seattle for the Arctic, where Shell was set to begin drilling for oil in remote territories where rapid responses to spills would be impossible. Together with the Portland action a few months later to block Shell’s Fennica ice-breaker from exiting the Port of Portland, the action has been credited with helping to shut down Shell’s plans to drill in the Arctic.

Check back soon for more updates!