The thermal-to-acoustic energy conversion occurs when heat is added to the acoustically oscillating fluid in phase with the acoustic pressure oscillations (Rayleigh criterion). The unsteady heat release inside acoustic resonators can lead to highly intensive sound, which is one of the reasons for rocket motor malfunctioning. However, thermoacoustic instabilities can be controlled, and acoustic energy can be produced and harnessed in Thermoacoustic Engines. A schematic of a standing-wave engine is shown below (a). The heart of thermoacoustic engines is the stack (made of porous material), where acoustic power is generated in the presence of externally maintained temperature gradient. At the proper location of the stack inside the resonator, the heat is transported to the gas parcels oscillating in the fundamental acoustic mode (b) at the time of their compression and extracted at the time of rarefaction (c). Besides simple standing-wave engines, more complicated and more efficient travelling-wave and cascade engines were developed at Los Alamos that demonstrated the second-law efficiencies up to 41%.

One of our objectives in thermoacoustics research was to develop efficient miniature power systems based on thermoacoustic engines. A schematic, photograph, and video clip of our small-scale engine demonstrator are shown below. The resonator is made of copper tubes and a ceramic stack holder. Reticulated vitreous carbon (RVC) is applied as a stack. Copper mesh screens placed on both sides of the stack serve as heat exchangers. The heat is supplied either by flame or an electric heater. A water-cooling jacket is arranged at the cold part of the engine. The system is equipped with a pressure transducer measuring acoustic pressure inside the resonator and two thermocouples measuring temperatures at the stack ends. This engine-demonstrator generates sound at temperature difference about 200 degrees Celsius. The sound amplitudes reach values of 2 kPa. 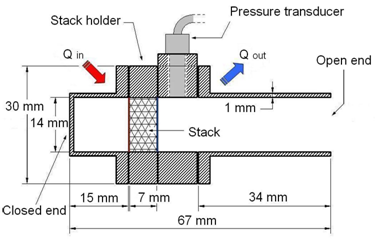 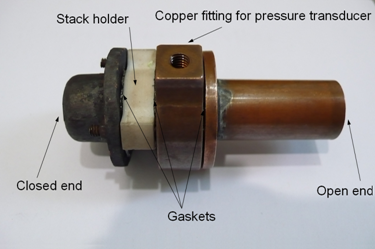 Thermal Buffer Tube (shown below) separates hot and ambient heat exchangers in travelling-wave thermoacoustic engines and cold and ambient heat exchanger in pulse-tube refrigerators. The role of this tube is to pass acoustic energy while minimizing heat transport due to boundary-layer entropy flow, heat conduction through the gas and the tube walls, radiation, and mass streaming. The heat transport depends on temperatures at the ends of the thermal buffer tube. Acoustic motion of gas parcels between nearly isothermal environment in the heat exchanger and nearly adiabatic space in the tube (a) leads to effective temperature jumps at the tube boundaries. Figures (b) and (c) below show temperature-position trajectories of gas parcels at this interface in case of (b) standing wave and (c) traveling wave. The right figure schematically shows mean flow known as Rayleigh streaming. It is caused by finite-amplitude acoustic oscillations. Rayleigh streaming can transport significant amount of heat between heat exchangers. 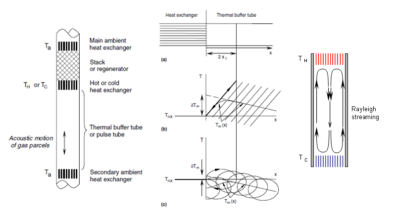 While being a postdoc at Los Alamos National Lab under supervision of Dr. Swift and Dr. Backhaus, Dr. Matveev investigated Thermal End Effects and heat transport by Rayleigh Streaming in thermal buffer tubes. We conducted experiments, derived analytical solutions, and carried out numerical simulations. A schematic and a photograph of the experimental system are shown below. This setup allows us to create highly controlled thermal and acoustic environments in thermal buffer tubes and record accurate data for the temperature field and acoustic pressure and velocity. 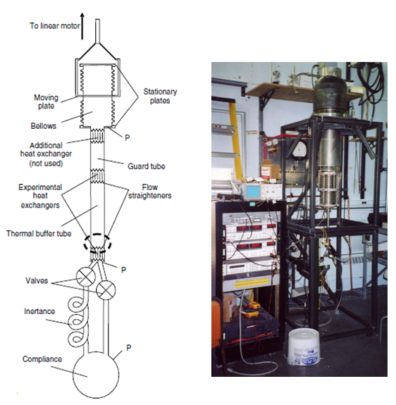 Thermoacoustic instabilities that occur in combustion chambers of rocket/aircraft motors and industrial burners may degrade performance or even damage these systems. Rijke Tube is a convenient system for studying thermoacoustic instabilities in devices with mean flow. A Rijke tube usually consists of an open-ended tube with a heat source inside. Mean flow is caused either by natural convection (vertical tubes) or by external means (horizontal tubes). According to Rayleigh criterion, the thermal-to-acoustic energy conversion occurs when there is an unsteady component of heat addition in phase with acoustic pressure fluctuations. 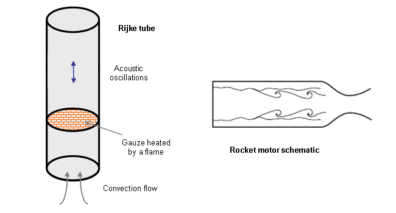 We have constructed a horizontal, electrically heated Rijke tube, where mean flow is provided by a regulated blower. Three main parameters can be independently controlled in this system: heater position, supplied heat, and mean flow rate. Resonators of different geometries can be used. In some ranges of main system parameters, loud sound is generated due to thermoacoustic instability of acoustic modes.

We discovered that the instability domain can be significantly broadened in a segmented tube. One of the causes is a reduction of thermoviscous losses due to lower natural frequency. The figure below shows the stability boundaries for the most favorable position of the heater. 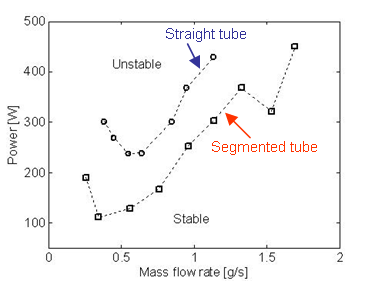 Acoustic instabilities, in the form of tonal sound excitation in resonators with mean flow, represent phenomena important in some engineering systems. Noise generation in duct systems with mean flow and unstable combustion coupled with acoustic oscillations in rocket motors and industrial burners (especially in lean flames aimed at reducing pollutant emissions) are examples of undesirable phenomena. Generation of tonal sound in several traditional musical instruments and whistles involves mean flow in resonators. Even when undesirable, energy of excited tonal sound can be harvested to produce electricity for powering sensors and other devices.

The generation of vortex-driven tonal sound in resonators with isothermal mean flows can be studied using a simple baffled tube with mean flow. In distinct ranges of mean flow velocity, a loud tonal sound is generated. An example of recorded frequencies of excited tones in our experimental setup is shown in the figure below. The horizontal lines in this figure correspond to the natural frequencies of the tube, while the frequencies of vortex impingement on the downstream baffle are shown by solid lines. The high-intensity sound is produced near intersections of these lines, suggesting strong coupling between acoustic motions and “hydrodynamic” vortex shedding. A part of the energy released at the vortex impingement on the downstream baffle is fed into acoustic modes. We have developed reduced-order models for this process that demonstrate good agreement with test data. 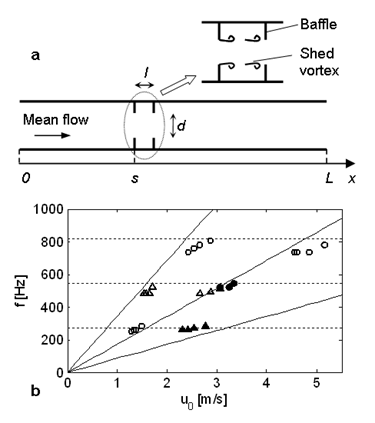 While vortex-induced tonal sound is often undesirable in most engineering devices, the generated acoustic energy can be harnessed and converted into electricity for powering sensors or other devices, thus eliminating the need for their battery replacement. The conversion of acoustic to electric power takes place in electroacoustic transducers, such as piezoelements. We have tested this concept in a modified baffled tube. Harnessed electric power is shown on the graph below. With further system optimization, the efficiency of energy conversion and harvested power can be significantly increased. 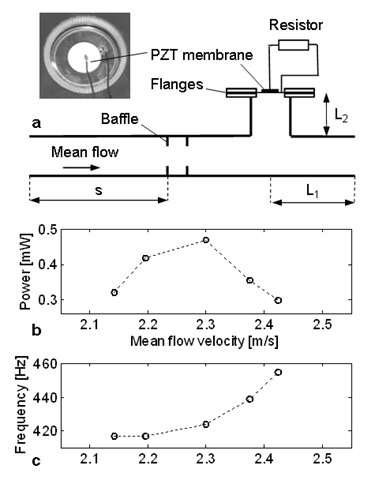 Some granular media have a Fractal Structure: their density depends on a sample size in some scale range. Such materials demonstrate interesting physical properties. For example, high-frequency low-amplitude sound can be trapped in these structures due to strong wave energy localization. At large sound amplitudes, the fractal structure may become disintegrated, and unusually high acoustic dissipation disappears. In the 1990’s under guidance of Dr. Esipov at Andreyev Acoustics Institute, Konstantin Matveev was involved in studies of laser-induced sound pulse propagation through cobalt manganese crust (CMC) ocean sediments, as shown below. In experiments we observed abnormally large dissipation at high frequencies and low amplitudes of sound and normal propagation at high amplitudes. These results suggested that CMC have fractal structure. Our numerical modeling of sound propagation illustrated how wave energy becomes trapped on fractals. 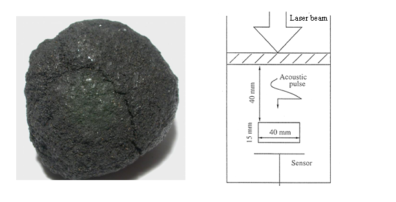 In another study, we investigated pressure fluctuations in random granular media under mono-frequency sound excitation. Very large random fluctuations in amplitudes of subharmonics and higher harmonics were discovered experimentally. We also numerically simulated vibrations of sphere chains with Hertz contacts. Constant-amplitude steady-state oscillations were found on regular chains and at low amplitudes on chains with randomly sized granules. Chaotic behavior of the signal was found at large amplitudes on random chains, in accordance with experiments.