The ear itself has three parts: the outer ear, the middle ear, and the inner ear. 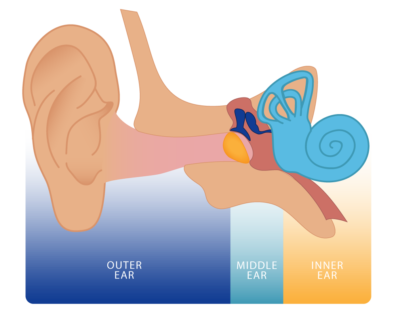 The outer ear is the parts that touch the outside air: the cartilage we see on the side of our head, and the ear canal we can stick our fingers into. The end of the ear canal is blocked by the eardrum, stretched over the opening.

The inner ear has the cochlea, a spiral snail shell shape. Inside the cochlea is filled with fluid and the shell is lined with bundles of tiny finger-like strands. These are called hair cells. The hair cells are connected to a nerve, which connects straight to the brain. 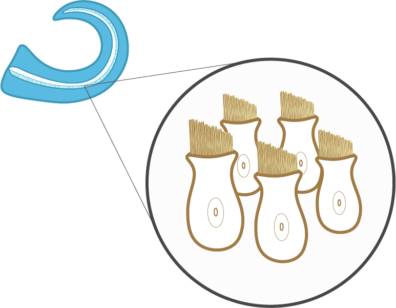 All these pieces work together to guide a sound to our brain: First the sound wave travels down our ear canal and vibrates the eardrum. The vibrations move through to the middle ear bones, which amplify the sound, sending it into the cochlea. The fluid in the cochlea ripples, sending waves down through the spiral. The ripple pushes over the hair cells, which act like a button, starting chemical reactions that create an electrical signal. This electrical signal shoots through our auditory nerve, which our brain understands as a sound.

The main ways to prevent hearing loss are to use earplugs and be aware of volume levels.

What we can do about Hearing Loss

The primary focus of the Coffin Lab is on biomedical research. Generally, the research is about the death of, therapy for, and regeneration of hair cells. It’s notable to say that along with the ototoxic meditation research, there is research on the effects of loud noises on zebrafish hair cells (acoustic trauma).

To study hair cells, the lab looks at the hair cells on zebrafish. In the same way our hair cells can tell when the fluid in our cochlea moves, fish have bundles of hair cells on the outside of their bodies that tells them when something is moving around the sea.

The lab is trying to find a drug that can protect the hair cells from the antibiotic’s ototoxic effects. Already there has been some success and mammalian trials are starting soon.