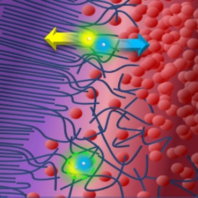 Graduate student Thomas Ferron’s work tying molecular mixing at interfaces to charge generation in organic solar cells (OSC) has been published in Journal of Materials Chemistry A. The work quantifies for the first time both the volume of the mixed phase and the efficiency of separating interfacial Charge Transfer states into free charges. A better than 99% correlation is revealed between these two phenomena in a model OSC system – made possible because both nanostructure and excited state dyanmics were measured on the exact same devices. Thomas’ analysis, furthermore, eliminates all other possible contributing factors to the correlation – implying a causal relationship that sharper interfaces (less mixing) causes higher charge separation efficiencies.

Critical to the study was a relatively new optical pump-electronic probe technique known as Time-Delayed Collection Field (TDCF). Although the technique is increasingly done around the world, the Collins group is the only one capable of the measurement in the US.  This is Thomas’ second 1st-Author paper published and includes as coauthors a former Undergraduate physics major Matthew Waldrip and former Masters student Michael Pope. The work was funded by the US Department of Energy as an Early Research Career Award. Congratulations to all involved!