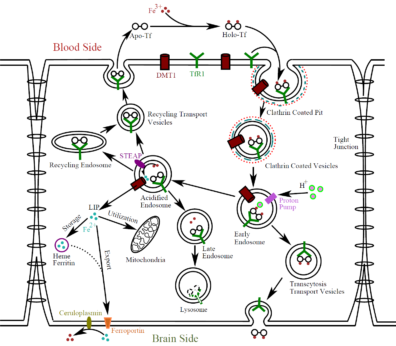 Transferrin and its receptors play an important role during the uptake and transcytosis of iron through blood-brain barrier (BBB) endothelial cells (ECs) to maintain iron homeostasis in BBB endothelium and brain. Any disruptions in the cell environment may change the distribution of transferrin receptors on the cell surface, which eventually alter the homeostasis and initiate neurodegenerative disorders. In this paper, we developed a comprehensive mathematical model that considers the necessary kinetics for holo-transferrin internalization and acidification, apo-transferrin recycling, and exocytosis of free iron and transferrin-bound iron through basolateral side of BBB ECs. Ordinary differential equations are formulated based on the first order reaction kinetics to model the iron transport considering their interactions with transferrin and transferrin receptors. Unknown kinetics rate constants are determined from experimental data by applying a non-linear optimization technique. Using the estimated kinetic rate constants, the presented model can effectively reproduce the experimental data of iron transports through BBB ECs for many in-vitro studies. Model results also suggest that the BBB ECs can regulate the extent of the two possible iron transport pathways (free and transferrin-bound iron) by controlling the receptor expression, internalization of holo-transferrin-receptor complexes and acidification of holo-transferrin inside the cell endosomes [1]. The comprehensive mathematical model described here can predict the iron transport through BBB ECs considering various possible routes from blood side to brain side. The model can also predict the transferrin and iron transport behavior in iron-enriched and iron-depleted cells, which has not been addressed in previous work.