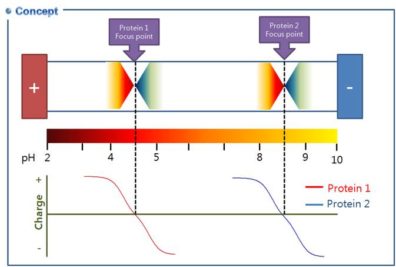 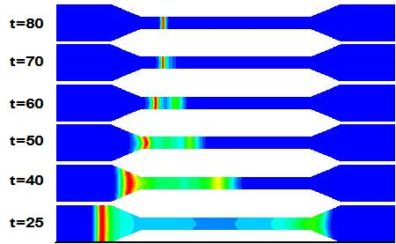 Modeling and simulation of IEF is an effective tool to investigate the transport phenomena and separation performance as well as to design IEF microchip. One of the key challenges of IEF simulation is the computational cost as one has to solve a large number of mass conservation equations. In a typical IEF, the pH gradient is formed by 100∼1000 ampholytic components. Thus, depending on the system of interest, one has to solve 100∼1000 mass conservation equations simultaneously [1-5]. Moreover, in a broad range IEF (3 < pH < 10) the concentration difference between ampholytes and hydrogen ion is six orders of magnitude, which makes the convergence of the numerical solution extremely difficult unless a very small time step or relaxation factor is used. For an unsteady IEF, the required small time step multiplexes the computational expense drastically. In this study, a parallel scheme for a 2D IEF simulation is developed to reduce the computational time. In this study, we adopted the segregated algorithm to simulate IEF and the parallelization is only implemented for solving the ampholyte mass conservation equations. We studied the effect of number of ampholytes to form the pH gradient and its effect in the focusing and separation behavior of cardiac troponin I and albumin. Our results show that, at the completion of separation phase, the pH profile is stepwise for lower number of ampholytes, but becomes smooth as the number of ampholytes increases [6].