In virtual environments real-time measurement of position and orientation of the user’s hand or head is mostly done using expensive tracking devices, such as the Flock of Birds by Ascension, Inc. Recently, the Nintendo Wii Remote appeared as an inexpensive alternative for tracking in 3D. In this research, performance of the Wii Remote was characterized through experiments with one and two remotes and by using a high precision Coordinate Measurement Machine (CMM). It was found that the two-parallel-remotes arrangement yielded the best measurement accuracy in about 50 cm depth from the remotes. The remotes could measure position with an average 9 mm horizontal and 6 mm vertical error. The roll angle was measured with ±3.4º average error. The worst errors were in the yaw and pitch angle measurements, ±7.4º and ±10º, respectively, due to the LED inclination angles. The long term goal of our research is to develop a lightweight haptic glove where the Wii Remote can potentially be used in tracking the user’s hand. 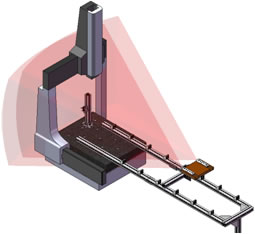 Coordinate Measurement Machine (CMM) was used to measure target object locations with high precision. Because the work volume of our CMM is smaller than the volume needed to be measured, an extension platform was fabricated. 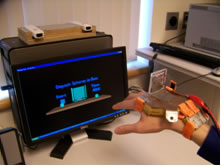 We explored Wii remotes as an option for tracking the user’s hand motion in virtual reality simulations. Two Wii Remotes could be placed on the computer monitor with three LEDs on the haptic glove to track the user’s hand movements.