For medical training purposes, most operations can be considered as a combination of two main action types that require much practice: needle insertion and tissue cutting. A haptic interface is highly desirable for training medical personnel in a virtual environment on these two fundamental tasks. In this study, we developed a compact haptic device that can simulate both of these tasks.

The device employs a hybrid actuator with a strong and stable response to reflect realistic tissue behavior. The hybrid actuator uses a custom designed MR-brake coupled in series with a DC-servomotor. Stiff tissues that exhibit high levels of resistance forces, such as bone and tendon, could be rendered as well as the fine force variations in heterogeneous soft tissue simulation. Furthermore, the new device provides additional improvements to previously developed haptic scissors by other researchers since the new hybrid actuator can provide a wider range of forces with less current consumption. 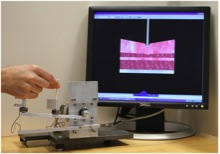 In this virtual needle insertion experiment, we have 4 layers of soft tissue with a total thickness of 45 mm resting on a rigid bone layer. During the experiment, the user applied force on the syringe to move it down vertically. Haptic feedback was provided according to the tissue model to reflect realistic tissue behavior while the tissue layers deflected and ruptured based on the needle penetration.

The virtual environment in tissue cutting simulation consisted of a pair of scissors and a tissue layer. The scissor blades had rotational degree of freedom about the pivot. The length of the cut in the tissue extended based on the opening angle of the scissor blades. During the simulation, the user felt the cutting forces as the virtual tissue was cut.