The primary motivation for this research was the need for a portable haptic interface that could be used in Virtual Reality simulations. In this application, the challenge is in designing an actuator that is small yet powerful. We used magnetorheological (MR) fluid to design a small passive actuator (brake) called MR-brake. MR fluids can be activated using magnetic field. In the inactive state the fluid has a viscosity similar to low viscosity oil. Upon activation it changes to a thick consistency similar to peanut butter. 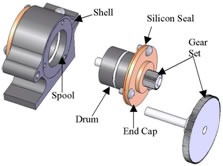 The MR-brake uses two concentric cylinders. The inner cylinder (the drum) rotates inside the outer cylinder (the spool). The gap between the drum and the spool is filled with the MR fluid that applies a controllable braking torque on the drum due to the change in its viscosity as a function of the strength of the applied magnetic field. The coil was wound on the spool and placed underneath the shell. 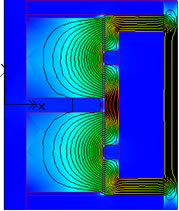 We developed the serpentine flux path concept which significantly improved the torque output while keeping the size of the brake constant. The serpentine flut path weaves the magnetic flux multiple times through the MR fluid in the gap between the shell and the drum. The flux path was shaped by using aluminum rings as insulators and steel rings as conductors of magnetic flux. The image on the left shows finite element analysis of the flux weaving through the MR fluid.

These miniature MR-brakes can provide about 900 N-mm braking torque. Each brake is about 25mm in diameter, 15mm wide and weighs about 85 grams. The brakes were used in the design of the MR-Glove and another haptic glove with distributed finger forces.