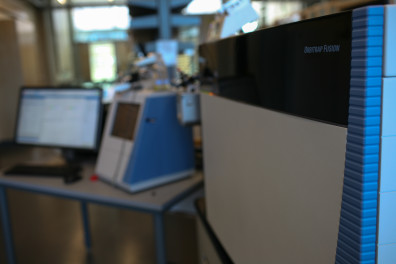 Our Thermo Orbitrap Fusion is the mainstay proteomics instrument in TIPL. With mass resolving power of up to 450,000 FWHM (full width at half maximum), it has the resolution to unambiguously identify peptides and their post-translational modifications (PTMs) with high mass accuracy (typically well below 0.3 ppm mass error), thereby supporting deep proteomic analyses. 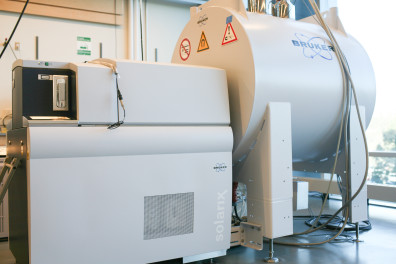 This is our workhorse instrument for MALDI-MS Imaging (Imaging Mass Spectrometry or Tissue Imaging) experiments (the photo is of our actual instrument). It can also be used for routine spotted MALDI experiments or for infusion ESI (electrospray ionization) experiments, such as for characterization of an intact protein to identify sites of post-translational modifications and determination of just what those modifications are. 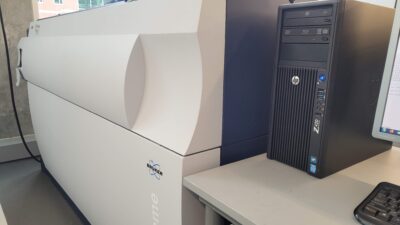 The Bruker ultrafleXtreme is a modern MALDI-TOF/TOF instrument with large dynamic and mass ranges. With a typical operating mass resolution of >70,000 (which is what our instrument routinely achieves) and the ability to detect and quantify ions with m/z up to 100,000 (although detection sensitivity drops off significantly after 50,000), the instrument is ideal for imaging of protein distributions in animal and plant tissues. For example, we have measured the distribution of a 38.4 kDa enzyme in turmeric rhizome sections and compared that to the metabolites in the metabolic pathway in which the enzyme functions, leading to confirmation of the role of the protein in that pathway.

We also use the instrument in traditional spotted MALDI protein identification/characterization experiments, where it can be used in top-down proteomic analyses, with direct sequencing of a protein from either the C- or N-terminus possible. In such an application, exact locations of specific post-translational modifications can be determined, as can the ratio of modified versus unmodified residues at specific positions. Importantly, this approach can be used for de novo sequencing of an unknown protein or a protein from a non-model organism.