The Tissue Imaging and Proteomics Laboratory (TIPL) was founded in 2014 as a joint venture between WSU’s College of Agricultural, Human, and Natural Resource Sciences (CAHNRS) and College of Veterinary Medicine (CVM) when the new Veterinary Biomedical Research (VBR) building was completed as the latest addition to WSU’s REC (Research and Education Complex) building system. By that time, researchers in the Institute of Biological Chemistry’s Murdock Metabolomics Laboratory (particularly the laboratories of David Gang, Mark Lange and Norman Lewis) had already begun to implement tissue imaging approaches in their largely plant science based research, utilizing a Waters MALDI-Synapt G2 HDMS instrument that had been acquired through a National Science Foundation Major Research Instrumentation grant that was funded in 2012. Proteomic analyses had been performed on a Waters Synapt G2-S HDMS instrument connected to a nano-Acquity UPLC.

With the opening of VBR in 2014, WSU took the opportunity to expand both the tissue imaging and proteomics capabilities on the Pullman campus and add complementary instrumentation into a new, centrally run University service center. The new lab, TIPL, was established to expand access to these technologies across the WSU system, serving not only plant science researchers, but also the animal science, veterinary medicine, neuroscience and biomedical science research communities in the Pacific Northwest. The decision to purchase the best instruments available for the respective technologies put WSU on the map with regards to high-end research capabilities.

In early 2020, Dr. Dodge Baluya was hired as the new Laboratory Manager for TIPL, bringing with him many years’ experience in MSI-based analysis of a wide range of biological samples. 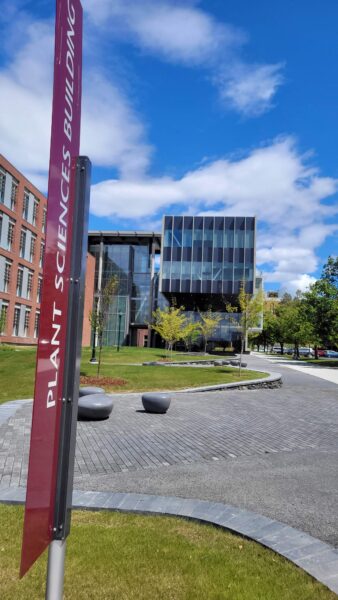 With the finishing touches being made on the next addition to WSU’s REC system in 2020, the Plant Sciences Building (PSB), TIPL and Gang’s instrumentation in MML merged to form a single facility, the Tissue Imaging, Metabolomics and Proteomics Laboratory (TIMPL), with the name changed to emphasize the strong emphasis in metabolomics as well as proteomics research.

In late Fall, 2020, the instruments from TIMPL moved into the new instrumentation suite of the PSB, as will other instruments managed by Lange in the MML. A dozen different mass spectrometer systems will move into one common space, fostering synergism across the agricultural, life and biological sciences at WSU.