My doctoral research focuses on identifying density dependent mechanisms and how they limit the production of imperiled fish species in anadromous streams. Changes in trophic energy routing as a result of 1) geomorphic based restoration prescriptions 2) reduced nutrient inputs and 3) competition from non-native fish species are done through the construction and application of transferable, empirically based, food web analysis tools. Results from this study aim to quantify biological limiting factors in natal streams to better inform restoration efforts.

Dramatic declines of native salmon and steelhead populations throughout the Pacific Northwest (PNW) during the past century have led to the extinction of certain stocks and the imperilment and federal listing of many others [1, 2]. Significant efforts have been undertaken to restore natal salmon streams throughout the PNW during recent decades. Although these efforts are massive and well-funded, a lack of evidence still exists, correlating restoration actions with target fish species [3]. Past and current restoration prescriptions often focus solely on correcting physical habitat conditions and geomorphic processes (abiotic) and focus less frequently on the complete set of biological drivers needed to increase and sustain natural production of juvenile salmonids [4].

Current research suggests that many natal streams inhabited by rearing anadromous salmonids are experiencing density dependent conditions. These conditions may be the result of reduced energetic carrying capacity, meaning that fewer fish can now rear and survive in areas that were historically more productive [5]. Although interior PNW streams are often naturally oligotrophic, this feature, played a key role in evolutionary processes supporting anadromy and the semelparous life history strategy (dying after spawning) exhibited by Pacific Salmon [6]. These carcasses naturally provided a key marine-derived nutrient source that completed the nutrient cycle, energetically justified anadromy, and dramatically increased biological production in oligotrophic streams throughout the interior PNW[7] However, decades of habitat loss and degradation, migration corridor challenges and migration-blocking dams in the Columbia Basin, have greatly reduced nutrient loading to a fraction (< 7%) of its historical contribution [2]. In addition to these reduced nutrient inputs, is the wide spread dispersion of non-native fish species, which directly compete with native fish species (anadromous and resident)  for limited prey resources [9, 10].

Accurately detangling density dependence in lotic ecosystems is imperative to identifying limiting factors and prescribing treatments that prioritize the corrections of those limitations. Geomorphic and habitat-based monitoring metrics, models and assessments (primarily abiotic) have been developed and employed as tools to assess current and ongoing physical limitations in riverine environments. Though needed and useful, their application does little to understand biological limitations. Furthermore, biological assessment tools based on static metrics (abundance, biomass and diversity) have some value, but lack the ability to quantify energetic limitations (food availability and trophic routing) and ultimately density dependence. In order to identify and then quantify density dependent factors, monitoring protocols and subsequent analysis procedures must capture dynamic, complex processes that directly affect energetic routing.

An extensive, multi-year, food web sampling and analysis plan allows me to develop an empirical, mass balance, bio-energetic approach. This approach  uses a series of estimators and analyses to produce dynamic metrics over time (annually), including taxa level production for fish and aquatic insect communities as well as the energetic relationships between fish and prey communities. This mass balance modelling approach is expected to address a series of questions, currently considered to be large knowledge gaps in restoration science.

Used as a pre- and post-restoration monitoring tool, a food web approach allows researchers and managers to evaluate the effectiveness of specific restoration actions. Empirically derived estimates allow for accurate assessments in a wide range of lotic environments, across watersheds. While empirically derived food web models have been applied in small academic studies, there is a lack of available, applicable analysis tools, to directly answer questions regarding density dependent concerns in a large, holistic, restorative context.

In order for researchers and managers to utilize a quantitative food web approach at a resolution applicable to regional restoration programs, much of the analyses is being constructed as a series of module R scripts, which should greatly assist researchers and managers in answering important restoration questions pertaining to specific density dependent limitations. For more detailed information on analysis methods and specific deliverables, follow link to analysis tools.

In order to understand the complex ecological effects of restoration treatments as they relate to food specific, density dependent limitations, I use a small, stable stream to conduct food web experiments. This site allows me to compare a highly degraded reach to an adjacent reach that was recently restored.

Located in the Methow River Sub-basin of north central Washington, Hancock Springs is a small (1.6 km-long), first order spring creek located at RKM 96 on the Methow River. Its small size and unique ecological conditions (annually stable hydrograph and thermograph as well as all the basins ESA listed salmonid species) provide an ideal opportunity to characterize and quantify a lotic food web. Unlike larger tributaries used for natural production throughout the Columbia Basin, Hancock Spring’s physical and biological attributes are ideal for high resolution fine-scale sampling. This scale of sampling is ideal to test assumptions related to restoration actions as well as  construct analysis tools that can be used to quantify food webs in other riverine ecosystems.

The study area includes two approximate 300 meter reaches. The upstream reach was restored in 2011 and represents the treatment reach, while the downstream reach remained unchanged from it’s degraded form and represents the control reach. Differences in reach level channel morphology are depicted in the digital elevation model and complexity differences are shown in corresponding photos.  To track fish movement, pit tag interrogators were installed at the bottom and top of both reaches (click on figure below to see layout).

In order to calculate estimates of energetic carrying capacity in different lotic habitats,  flow webs, quantifying trophic energy routing must be constructed. This level of analysis is often complex, tedious and extremely time consuming. By developing  a series of R analysis tools  I hope to streamline and simplify this process, allowing managers to utilize these methods to diagnose energetic limitations prior to prescribing treatments. R scripts are designed and constructed to be used at multiple analysis levels, depending on research questions and data resolution.

Analysis tools include computation and error propagation for trophic production and energy routing metrics. In some cases lab data can be directly imported into a developed database, from which a series of scripts compute metrics of interest. 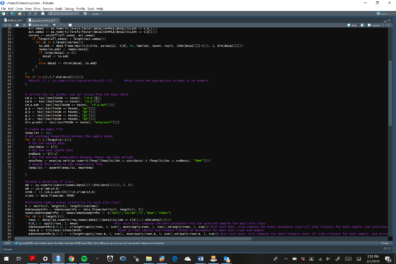 Photos and videos show restoration and monitoring in progress 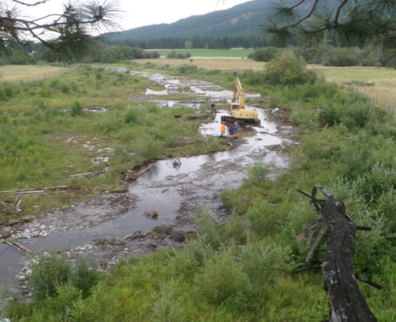 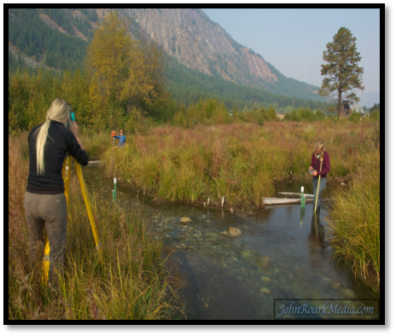 We consider Hancock Springs to be a true-spring; that is, a system which exhibits stable baseflows, temporally-limited temperature fluctuations, and a very low sediment supply. Discharge emanates from a discrete source of upwelling, although hundreds of additional, visible inflows exist along the 1.5 km length. Temperatures exhibit a modest amount of diurnal fluctuation but little annual flux occurs. Characteristic of groundwater-influenced streams, Hancock Springs generally has water temperatures that are warmer than the ambient air in winter yet is colder during the summer. Owing to its stable discharge, low gradient and heavily vegetated streambanks, little bedload or suspended sediment transport occurs. These physical properties formed the basis for determination of a useful reference reach, from which physical parameters were derived for restoration.
Although the present-day land-use practices were minimally contributing to degradation of the channel environment, natural recovery was very limited following the initial riparian clearing in the 1890s. Absent sediment deposition to rebuild point bars, little vegetative recovery occurred and the planform geometry closely followed the valley gradient (i.e., sinuosity ≈ 1.1). Landowner reports and an aerial photo from 1930 indicates that multiple beaver dams also inundated much of the reach which prevented formation of a hydraulically-formed lotic environment.
No known information exists on the pre-disturbance channel morphology. Therefore, assumptions about this previous state were made based on observations of other spring-fed channels in glacial valleys with unconfined lateral channel boundaries and very low (<0.5%) channel gradients. Spring-fed channels are otherwise almost non-existent in the Upper Columbia Basin, therefore, using the aforementioned attributes as a guide, reference reach data was sought from outside the region. The Upper Deschutes Basin (OR) met these criteria where multiple, field-surveyed datasets were available to inform design channel morphology. Specifically, Goose Creek, Fall Creek, and the Upper Deschutes River were believed to be in reference or near-reference condition. While all three systems are of variable size, normalizing the dimensional values of each morphological attribute by an appropriate denominator produced a suite of usable dimensionless ratios. All three systems yielded dimensionless values within a similar range, thus validating that the channel morphology developed over time yields a consistent, predictable, stable channel form.
Following a modified method developed by Rosgen (2011), the range of dimensionless values for channel pattern and profile were transformed to dimensional relations at Hancock Springs by multiplying each parameter by bankfull width, depth, and mean slope, as applicable. This produced a range of values for meander length, radius of curvature, beltwidth, pool-to-pool spacing, riffle depths, and other attributes. Valley slopes from the reference reaches were comparable to Hancock Springs and, given similar boundary conditions controlled by dense herbaceous vegetation (primarily Carex spp.), a target sinuosity value was chosen. Then, an iterative process was performed in AutoCAD Civil 3D to draw each meander, within the range of reference reach-derived hydraulic geometry, and fit to the site.
A spatially-explicit technique was used to measure discharge longitudinally by sampling transects every 60 meters which helped to identify generalized areas of groundwater gain or loss. This was conducted over the course of several years at multiple points throughout the hydrograph. Rearranging the terms of Manning’s equation allowed solving for n based on measured discharge and velocities. Since channel roughness (n) would not change appreciably during construction, applying the known discharge and adjusting the desirable velocities at each 60m interval allowed the selection of dimensional design variables such as cross-sectional area, riffle and pool depths. Therefore, as discharge increased or decreased, as well as within tributary side channels, dimensional parameters were scaled and balanced iteratively to achieve desirable values.
Certain design parameters could not be reliably constructed with high precision given the limited discharge information and the very low gradients involved. Achieving sufficiently low-gradient pools, sloped riffles and a wetted perimeter close to the “bankfull” condition (somewhat a misnomer in a spring-fed stream) were instead refined in the field. As needed, the addition of gravel in riffles reduced the facet slope of the upstream pool and increased stage to near the top of the constructed streambank. Riffle slopes were steepened by the addition of gravel at the invert or by excavation of the run into the pool below. The placement of woody material was also used to manipulate stage and change local velocities by altering the orientation in which it was positioned.